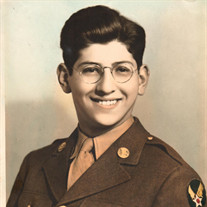 Abraham "Abe" Solomon Freedman, 94, passed away peacefully of Tuesday, April 3, 2018 at Mars Hill Retirement Community. Abe is survived by his two sons, Michael (Carolyn Bacal) and David (Libby); his daughter, Janet Freedman-Cope (Paul); also surviving are four grandchildren, Jack, Gary, Ariel and Chai Freedman. A native of Bronx, NY, Abe was one of the seven children of the late Ida and Louis Freedman. Abe and his siblings were proud to be first generation United States Citizens. Abe served in the Philippines during WWII in the U.S. Army and never thought he'd survive and return home. He did make it home and was able to continue on with raising a family and a having a productive career in clothing manufacturing. Abe received his two year formal education at F.I.T. (Fashion Institute of Technology) in New York which was paid for by the Army. During that time, Abe met Rose "Roz" Slovick at a dance. They married in September 1948 and remained married for 64 years until Roz's passing in 2012. In 1970, Abe moved his family to Asheville and became the Regional Manager at Asheville Manufacturing. Abe oversaw several textile factories in the south as well as along the east coast. Abe was a strong advocate for "building your own business" and helped Roz create and sustain Roz's Uniforms which was in business for 20 years. Abe also fostered several small businesses in Western Carolina and taught evening classes at AB-Tech about entrepreneurship. He served as President of Beth Israel Synagogue and the Jewish Community Center in Asheville as well as being active in other local organizations such as the The Highland Guild Association. Abe was very fond of Asheville and the people of Western North Carolina. He loved his family and traveling with them; loved the arts, foreign films, museums, Broadway plays, local plays and was frequently at S.A.R.T. in Mars Hill. He loved his dogs and cats. Abe was loved by many and will be missed by all that knew him. The family wants to express their gratitude to the wonderfully kind and compassionate staff of Mars Hill Retirement Community and with CarePartners Hospice. A graveside service will be held at 1:00pm on Thursday, April 5, 2018 at Lou Pollock Cemetery with Rabbi Justin Goldstein officiating. In lieu of flowers, contributions may be sent to hospice through the CarePartners Foundation, PO Box 25338, Asheville, NC 28813. Morris Funeral Home is assisting with arrangements. Condolences may be made through the website, www.morrisfamilyfuneralhome.com

The family of Mr. Abe Freedman created this Life Tributes page to make it easy to share your memories.