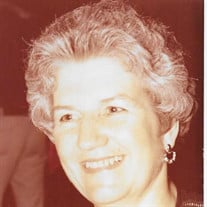 Alice Moore, 89, of Fletcher passed away on March 31, 2019 at The Elizabeth House following a period of declining health. Alice was born in 1929 in Yancey County, NC to the late Bayles and Helen Moore. She was preceded in death by her daughter, Anne Lewis Wolfe; her grandsons, Will Lewis and Matt Lewis; her brothers, Ralph, Alvin and Walter and her sisters, Mary Jane, Reba and Kathleen “Kitty”. She is survived by her daughters, Cathey Lewis and Billie Gayle Lewis; her sons, Bill Lewis and Grover (Bo) Lewis; her granddaughters, Tessa Lewis and Toni Bowen; her grandsons, Chuck Shepherd, Joey Shepherd and Chris Glunt; three great-grandchildren; her brother, Reese and her sisters, Mary and June. She was a strong, determined and fiercely independent woman. She was raised on a farm near Burnsville, married at 17, and had five children at the age of 30. In her late thirties, she was a single mother with only a 7th grade education and no work experience. Her approach to this exemplifies the kind of woman she was. Rather than being defeated, she worked two jobs and also started to buy and sell at the Dreamland Flea Market in Asheville. She was very smart and had a natural talent for bartering, buying and selling, and eventually focused all her energy on dealing in antique and vintage items. Once her children were grown, she traveled all over the East Coast working flea markets, where she made friends with people from all walks of life. She eventually established a shop at Smiley’s Flea Market in Fletcher which she operated until her 88th year. She will be missed by her family and the many friends she made through her travels and her shop. A memorial service will be held 5:00 PM, Thursday, April 18, 2019 in the chapel of Highlands Cremation and Funeral Care, 2393 Hendersonville Road, Arden, NC 28704.

Alice Moore, 89, of Fletcher passed away on March 31, 2019 at The Elizabeth House following a period of declining health. Alice was born in 1929 in Yancey County, NC to the late Bayles and Helen Moore. She was preceded in death by her daughter,... View Obituary & Service Information

The family of Alice Hope Moore created this Life Tributes page to make it easy to share your memories.

Send flowers to the Moore family.