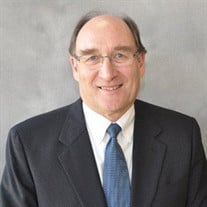 Allan Marshall Gerson passed away August 16, 2019 in Asheville, NC after a long struggle with renal cell cancer. He described his life as “unremarkable, very happy and well-lived.” Allan was born February 8, 1947 in Cumberland, MD, a small city in the mountains of western MD. He graduated from The Mercersburg Academy, Mercersburg, PA in 1965. He earned a Bachelor of Arts degree in Economics from the University of Pittsburgh in 1969 and a Juris Doctor degree from the University of Maryland School of Law in 1972. Following graduation, he practiced law in Cumberland for eleven years handling mostly real estate and business transactions. In 1983, Mr. Gerson gave up his law practice to simultaneously pursue two dreams: to be a college professor and live in Florida. He moved to Palm Beach County and began a career at Palm Beach State College (f/k/a Palm Beach Community College) that spanned 23 years. During that time, he was Chair of the Legal Studies Department, Academic Division Chair, Department Chair and Chairman of the College Foundation Board. Notwithstanding his administrative duties, his students were always most important to him and he was happiest in the classroom. He and his wife, Carol Vogtman Gerson, enjoyed an energetic lifestyle at PGA National, Palm Beach Gardens, FL. During those years, Mr. Gerson was actively engaged in the College, the community and the Palm Beach County Bar Association. He retired from the Florida Bar in 2017. During those years, he also played a lot of tennis and golf. Allan and Carol were quick to notice that during the summer months in south FL, a segment of the population travelled to western NC to escape the heat and humidity. Curiosity and pure happenstance eventually led them to Lake Toxaway, a beautiful, serene resort community tucked away in the steep mountains of Transylvania County, NC. They built a summer home there in 2000 and in 2005, Mr. Gerson experienced his first complete retirement. In less than two years, however, he and Carol were ready to go back to work. He was increasingly uninterested in playing golf and eating buffets. They moved to Asheville, NC where they remained until his death. In 2008, Mr. Gerson became Chair of the Legal Studies Department at South College Asheville and resumed teaching. He was responsible for having the institution’s associate paralegal and baccalaureate legal studies degrees approved by the American Bar Association and the North Carolina Bar. Upon his retirement in June 2017, he was honored with the naming of the Library Legal Collection in recognition of his contribution to his students and South College. He also served as a member of the AB Tech Community College Foundation Board. To all of his students and colleagues, he was a friend, mentor and respected educator. While in Asheville, Mr. Gerson revived a long-dormant hobby from his childhood, Lionel trains. He took great joy in building and running a large layout. He would turn on the locomotives, the lights and the noise, blow the whistles and “be seven years old” again. His parents, Robert and Katherine Gerson, predeceased him, and provided a wonderful upbringing and opportunities that he appreciated for the rest of his life. He is survived by his loving wife Carol, sister Sally Marshall and husband Nate, nephews Mitchell Levenson and wife Mary Anne, and David Levenson, all of Pittsburgh, PA, sister-in-law Karen V King of Cumberland and best devoted friend, Greg Smith of Asheville. During his life, he cherished a succession of dogs. Throughout his 32 years in education he always went to campus wearing a suit and tie in order to set an example of professionalism for his students. Beneath the suit and starched appearance, however, was a sharp and clever sense of humor which always found laughter in life’s circumstances and academia’s stuffiness. He particularly enjoyed taking his students to the Court House to observe trials and meet with judges and attorneys. It was his desire to improve the lives and prospects of his students through education and sensible advice. Because of the dedication, teaching and influence of Mr. Gerson, there are many more people today in the legal profession. He hoped that civilization will forgive him. His family wishes to extend their sincere thankfulness to the highly skilled and caring doctors, nurses and staff at Cancer Care of WNC , Mission Health, Care Partners, Chinese Acupuncture & Herbology Clinic, and MD Anderson Cancer Center, Houston. A graveside service will be held Monday, August 19 at Frostburg (MD) Memorial Park. In lieu of flowers, memorial gifts may be made to a cancer society or research center of your choice.

The family of Allan Marshall Gerson created this Life Tributes page to make it easy to share your memories.