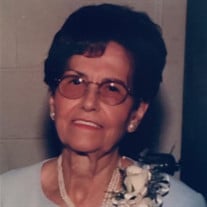 Anna Xenakis, of Asheville, North Carolina, passed away on May 30, 2019, after a short illness. A native of Chios, Greece, Anna was the beloved mother of Hope Xenakis (Ray), Betsy Xenakis, Xenoula Maria Easton (Brian), and Frances Earnhardt, and much adored Yiayia to granddaughter, Alexandra Easton. She is preceded in death by her husband of over 45 years, Stelios Xenakis; her parents, Athanasios and Fotini Karthasi; her sisters, Maria and Vasilia Karthasi; her brother Kyriakos Karthasi; her brother-in-law, John Xenakis and her sister-in-law, Georgia Xenakis; along with her sisters-in-law and brothers-in-law in Greece. Her parents survived the horrific population exchange of Greeks in the Greek part of Cesme, Turkey, and settled in Chios. Anna is survived by several beloved nieces and nephews, living in Asheville, including the Arakas family, New York and Greece, as well as a first cousin she spoke to every month without fail from Adelaide, Australia and sister-in-law, Evangelia Karthasi. Immigrating in the late 1950’s, Anna assisted her husband, Stelios, at his first restaurant in Biltmore Village, The Plaza Café. He then opened Johnny O’s Sandwich Shoppe on Battery Park Avenue in Asheville in the 1970’s. Anna was a long standing member of Holy Trinity Greek Orthodox Church in Asheville, as well as a member of the Philoptochos Society. She volunteered tirelessly helping bake Greek delicacies for church bake sales and festivals. Anna never met a stranger and loved to show them her affection through her kind deeds and delicious treats. Despite a language barrier, she managed to have friendships with neighbors, customers from Johnny O’s, and everyone she ran across. Her warm personality and keen sense of humor will be deeply missed by all. The family will be receiving friends at Morris Funeral Home, 304 Merrimon Ave., on Sunday, June 2, 2019 starting at 5:00pm followed by a Trisagion service at 5:50pm. The funeral service will be held at Holy Trinity Greek Orthodox Church, 227 Cumberland Ave., at 11:00am on Monday, June 3, 2019. Both services will be officiated by Father Michael Diavatis. Following the burial service at Ashelawn Gardens, a Makaria luncheon will be held at the Tony and Helen Morris Hellenic Cultural Center. In lieu of flowers, a donation made be made to the Holy Trinity Greek Orthodox Foundation or Church, 227 Cumberland Ave., Asheville, NC 28801.

The family of Mrs. Anna Xenakis created this Life Tributes page to make it easy to share your memories.

Anna Xenakis, of Asheville, North Carolina, passed away on May...

Send flowers to the Xenakis family.