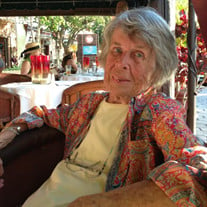 Anne McDowell Chiles, 96, of Asheville, NC, slipped away peacefully on July 25, 2020, at the home of her daughter, Mary Chiles Brooks. No longer able to stall by speaking her often-used, time-buying phrase, “in a minute,” she joined her husband, John M. A. (Ike) Chiles, who predeceased her on April 7, 2008. Born in Mount Holly, NC, on September 12, 1923, she was the daughter of Willis E. and Kathleen Coleman McDowell. (Her only sister, June McDowell Sill, died on January 2, 1998.) Anne grew up in Salisbury, NC, graduated from Boyden High School in 1940, and from Woman’s College of the University of North Carolina in 1944 with a Bachelor of Arts degree. Anne loved music, and played the violin in high school, college and with the North Carolina Symphony. After college she worked for Pennsylvania Central Airlines (Capital Airlines.) In 1948, the airlines transferred her to Asheville. She met Ike when they both volunteered at the Asheville Community Theater. They married in 1950 and began 57 years of adventures together. In addition to caring for their six children, Anne taught school at St. Genevieve-of-the-Pines and Buncombe County Schools in the 1960s. In 1977, she earned a culinary arts degree from Asheville-Buncombe Technical College. In 1980, she became a licensed real estate broker. Anne sold real estate on Topsail Island, NC, and managed a marina, named Annamarina, that Ike had designed and built. Anne’s husband Ike, her six children, grandchildren, and great-grandchildren were the very center of her life. She devoted and committed her time and energy to loving them all. She also loved the ocean, while her husband, a native Ashevillian, loved the mountains. Geographic locations were a tug of war. They retired to Kenilworth, in Asheville, where Ike’s family roots run deep. Anne would often be seen there walking her two beloved Shelties up and down the hills of the neighborhood. She is survived by her six children and their families: daughter, Kathy Skaggs, her husband Ashley, their son Mac of BCS, Mexico, and their son Ben and his fiancé Kelly Watermeyer of Hood River, OR; son Tripp Chiles and his wife Bonnie of Penrose, NC; son Richard Chiles, his partner Terry Day of Lewisville, NC, Richard’s daughter, Anna Hurst, her husband Zach, and Richard’s stepdaughter Natasha Clabern of Asheville, NC; son John M. Chiles, Jr., his wife Holli, their son Jake and his wife Christen of Asheville, NC, and their son Ben and his partner, Nicole Mathis of Kernersville, NC ; daughter Mary Brooks, her husband Barry of Aiken, SC, and Barry’s son, Michael, his wife Cassidy of St. George, UT; and daughter, Nancy Chiles of Charleston, SC. In addition to her six grandchildren she has three great grandchildren and four step great grandchildren. They will all miss that twinkle in her bright, blue eyes signaling she was ready for fun. Anne spent her final days in Aiken, SC at the home of her daughter and son-in-law, Barry Brooks. The family is most grateful to Mary and Barry for the loving care rendered to her. They are also appreciative of her caregiver, Bertha Jones and the professional hospice team at Kindred Hospice in Aiken, SC. The family asks you to remember Anne by adopting a pet or telling your loved one, especially your child or dog, you will do it “in a minute.’’ The family asks that memorials be directed to Kenilworth Presbyterian Church, 123 Kenilworth Road, Asheville, NC 28803, where Anne and Ike were members and where they worshipped with their children. Anne will be buried next to Ike in the family plot at Riverside Cemetery, Asheville, NC, in a private family service. A memorial message may be sent to the family through the online guestbook at Morris Funeral Home of Asheville NC. https://www.morris-funeralhome.com

Anne McDowell Chiles, 96, of Asheville, NC, slipped away peacefully on July 25, 2020, at the home of her daughter, Mary Chiles Brooks. No longer able to stall by speaking her often-used, time-buying phrase, &#8220;in a minute,&#8221; she joined... View Obituary & Service Information

The family of Anne Irene McDowell Chiles created this Life Tributes page to make it easy to share your memories.

Send flowers to the Chiles family.