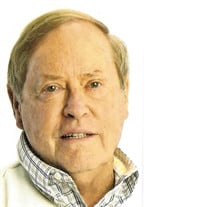 WEAVERVILLE - Arthur Eugene (Gene) Knoefel III of Weaverville peacefully passed away on October 18, 2021. Gene was born on July 22, 1936, in Asheville, the son of the late A.E. Knoefel, Jr., M.D., and Marie Aline Eris Knoefel. He grew up in Black Mountain and was a graduate of the last class of the then Black Mountain High School. As a teen, he was active in scouting and proud of achieving the rank of Eagle, the God and Country award, and being tapped into the scouting honor society, The Order of the Arrow. Gene attended N.C. State University where he lettered in cross country, Mars Hill College, and the University of Tennessee, where he was a member of the Pi Kappa Alpha fraternity and received a BS in Civil Engineering. Upon graduation, he moved to Sacramento, California, and worked for the State of California for over 36 years, the majority of which he served as Chief of Long-Term Care Reimbursement. While in California, Gene’s primary enjoyment was traveling around the State with the love of his life, Ellen. He also loved running and was proud to have completed 2 marathons, ran over 3,000 miles one year, and at one point kept up a continuous running streak for over 4 years. Gene was preceded in death by his beloved parents, sister Charlotte Sarti, and nephew Kevin Clark. He is survived by his devoted wife of 44 years, Asheville native Ellen Dave Knoefel, sons Eric Knoefel (Julie), Jeff Slosman (Debra), Richard Slosman, and daughters Katina Isaacson (Jeff), and Elyse Cyphers (Stephen); grandchildren, Caty (Robbie), Nick, Carson, Bennett, Kellon, Sienna, Dawna (Shane), Jessica, Derek (Cristina); great-grandchildren, Hannah, Aiden, Owen, Oliver, and Brooks; niece, Stacey Blackwelder; nephew Brett Clark, and lots of loving extended family and friends. Upon retiring, Gene and Ellen moved from California back to their beloved Western North Carolina mountains and settled in Weaverville. For many years Gene was an avid golfer, especially enjoying the comradery of his regular golfing friends. He became active in Town government, was appointed to 2 terms on Weaverville’s Planning and Zoning Board, and then successfully ran for and served 2 terms (8 years) as a Commissioner on Weaverville’s Town Council. Here he represented the Town as Director on the Land of SKY (LOS) Regional Council and served on their Executive Committee for over 2 years. Gene became very active in programs for the aging, serving on several committees of the Area Agency on Aging, and at the recommendation of the LOS staff was appointed by the Buncombe County Commissioners as the County’s delegate to the North Carolina Tar Heel Senior Legislature and to the County Nursing Home Community Advisory Committee, where he was an advocate for nursing home residents. Gene was known for his humor and especially that of his fortitude in battling the hardship and trauma of the many surgeries and infections he incurred during the latter part of his life. A remembrance service in his honor at 1:00 pm on Sunday, October 24, 2021, at Congregation Beth HaTephila. In lieu of flowers, the family requests donations be made to a meaningful charity of your choice. Morris Funeral and Cremation Care is serving the family and to sign the online guestbook or to share a message please go to www.morrisfamilycare.com

WEAVERVILLE - Arthur Eugene (Gene) Knoefel III of Weaverville peacefully passed away on October 18, 2021. Gene was born on July 22, 1936, in Asheville, the son of the late A.E. Knoefel, Jr., M.D., and Marie Aline Eris Knoefel. He grew up in... View Obituary & Service Information

The family of Arthur Eugene "Gene" Knoefel III created this Life Tributes page to make it easy to share your memories.