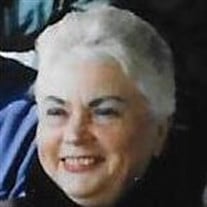 Betty Joan (Smith) Holey passed away on February 9, 2017 in Black Mountain, North Carolina at the age of 90. Born in Toledo, Ohio on October 17, 1926, she was the second oldest of five girls born to the late Grant Harold and Eunice (Lauer) Smith. After graduating from Whitmer High School, in Toledo, Ohio in 1944, Betty attended Bowling Green University where she graduated with a degree in Home Economics and Social Studies in 1948. Betty married Robert Emerson Holey of Toledo, Ohio at Trilby Methodist Church on August 21, 1948. She taught school in Petersburg, Michigan for four years before Betty and Bob moved to Freeport, Illinois in 1952, where Bob started his professional career with Micro Switch. They started their family shortly thereafter and raised three children, John Edward (1953), Mark Emerson (1954), and Carole Jean (1961) in Freeport. They resided in Freeport for 28 years, except for a three-year period in Newtown, Connecticut from 1973-1976. In 1980, they moved to Asheville, North Carolina, where Bob was transferred as a Location Manager for Micro Switch. Betty and Bob lived in the Asheville area ever since. Betty lost her beloved Bob in 2014 when he passed away on the very same date. Betty was a devoted and caring wife, mother, grandmother, and friend. Her children were very blessed that she was always there to support them, before and after school, and for the many after school, sporting, and church events. Betty continued that same support for her grandchildren, visiting them annually. She was a gifted seamstress and made cherished “Grandma’s pajamas” and special clothing for all the grandchildren. She was a faithful and dedicated member of her church families at Embury United Methodist in Freeport, Illinois, Newtown United Methodist in Newton, Connecticut, and St. Paul’s United Methodist in Asheville. She served as Junior High Superintendent at Embury, and chairwoman of the Council on Ministries and United Methodist Women at St. Paul’s. Betty was also active in civic and social causes serving as president of the Freeport YWCA when a new building was dedicated, secretary of the Northwestern Illinois Community Action Agency, president of the Weaverville Garden Club, active in Asheville Buncombe Community Christian Ministry, and a lifelong member of the P.E.O. Sisterhood, most recently member of Asheville Chapter BO. Betty is survived by her sons John (Dianne), Lafayette, California; Mark (Michaela), Sturgeon Bay, Wisconsin; and daughter Carole Fogal, Asheville, North Carolina; beloved grandchildren Dr. Chelsea Leigh-Anne Fogal (Adam Cotton), Andrew Fogal, and Abigail Fogal of Asheville, North Carolina; Michael Holey and Oliver Holey of Sturgeon Bay, Wisconsin; Alexandra Holey, Portland, Oregon; and Austin Holey (Kristina), Emeryville, California She was preceded in death by her parents and sisters, Arletta Howe, Miriam Freels, Mildred Thomas, and Jean Dennis. A memorial service to celebrate her life will be held on April 8, 2017 at the St. Paul’s United Methodist Church, 223 Hillside Street, Asheville, North Carolina. The service will begin at 2:00 PM and be followed by a reception in the church’s Fellowship Hall. In lieu of flowers or gifts, the family requests a donation in memory of Betty Holey to the Treasurer PEO International Headquarters, Educational Loan Fund, 3700 Grand Avenue, Des Moines Iowa, 50312

Betty Joan (Smith) Holey passed away on February 9, 2017 in Black Mountain, North Carolina at the age of 90. Born in Toledo, Ohio on October 17, 1926, she was the second oldest of five girls born to the late Grant Harold and Eunice (Lauer)... View Obituary & Service Information

The family of Mrs. Betty J. Holey created this Life Tributes page to make it easy to share your memories.