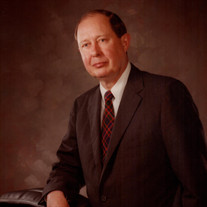 Bretney Smith, Jr., 89, of Asheville, died on Saturday, February 3, 2018 at his home at Givens Estates. A native and life long resident of Asheville he was born on November 22, 1928 to the late Bretney Smith and Elizabeth “Boots” Brown Smith. In addition to his parents he was preceded in death by his son, William Bretney Smith; his sister, Mary Elizabeth McMahon, and her husband Frank; and his nephew, Robert Alexander McMahon. He attended Asheville School for Boys before transferring to Darlington School for Boys in Rome, GA. He graduated with a BS from University of North Carolina, Chapel Hill before joining the United States Navy. Upon his return home he graduated from North Carolina State University’s School of Forestry. His new degree led him to take in job in Birmingham, AL where he met the love of his life Coleman Cross of Gadsden, AL. They married and they returned home to Asheville to join his father in the family business, Swannanoa Cleaners becoming the third generation to do so, he retired in 2016. Bretney was a member of Quality Forward, Asheville Rotary Club, Civitan, Biltmore Forest Country Club, DeKe fraternity at UNC, Chairman of the Board of Asheville Savings Bank, on the board of Stewards at Central United Methodist Church, a past President of the North Carolina Dry Cleaning Association, on the board at CarePartners, and on the board at Givens Estates. He enjoyed all things outdoors, hunting, fishing especially at his home at Lake Tahoma and was on the tennis team at UNC. Bretney was a lover of animals, collegiate sports and most of all his family. He was a devoted husband, father and uncle. He will be truly missed by all that knew and loved him. He is survived by his loving wife of 59 years, Coleman Cross Smith; his daughter, Elizabeth Stacy Smith and her wife, Susan McCreary of Asheville; his brother, Canie Brown Smith and his wife, Lyn Roda of Asheville; his niece, Whitney DeVargas and her husband, Roberto of Asheville; his nephew, Blake Smith of Asheville; his nephew, Thomas Bretney McMahon and his wife, Susan C. Lewis of Asheville; his niece, Bea King and her husband, Bruce of Florence, SC; his niece, Ginger Finder and her husband, Robert of Spartanburg, SC; his nephew, Robert Wilder and his wife, Susanne of Colombia, SC; and his nephew, Todd Cross and his wife, Sally of Montgomery, AL. A funeral service will be held at 2:00 PM on Thursday, February 8, 2018 in the Norma F. Pulliam Chapel in Asbury Commons of Givens Estates, with Dr. Rob Blackburn officiating. Burial will follow at Riverside Cemetery. The family will receive friends beginning at 1:00 PM in the Chapel Conference Room. In lieu of flowers memorial contributions may be made to The Asheville Humane Society, 14 Forever Friend Lane, Asheville, NC 28806, or to Brother Wolf Animal Rescue, 31 Glendale Ave, Asheville, NC 28803.

The family of Bretney Smith Jr. created this Life Tributes page to make it easy to share your memories.