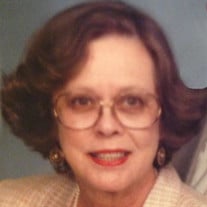 Carlotta Autrey Roberts passed away after a lingering illness on Sunday, June 5, 2016 at Asheville Manor where she had resided for several years and received outstanding care. She was born September 30, 1929 to Thomas Carl Autrey and Doris Edwards Autrey in Asheville, NC and continued to grow up there until leaving for college. Carlotta began her schooling at St. Genevieves-of-the-Pines before being enrolled in Asheville City Schools, graduating from Lee Edwards High School in 1948. Up until her death she continued to enjoy classmates and was able to maintain friendships over the years and miles. In Asheville, during her teen years she was a member of Nu Phi Mu Sorority where she enjoyed the formal dances that were so much a part of her social life. She was a lifetime member of St. Paul's United Methodist Church, formerly Hillside-Merrimon UMC. She shared her musical talents and lovely alto voice by singing in the church choir. From high school Carlotta went to High Point College in order to pursue her teaching career. She was a member of Sigma Alpha Phi Sorority, and before graduating was voted "Miss Future Teacher of America". From there she taught school in the Durham School System and met her future husband, Frank Warren, Jr. a Durham native and graduate student at Duke Divinity School. They married and moved to Richmond, VA where he was enrolled at Union Theological Seminary and Carlotta continued her teaching career in Virginia. Eventually, they moved back to Asheville with their three sons where Carlotta remained after Frank's death. Years later she married Don Roberts who also preceded her in death. She enjoyed being involved in his children's lives along with her own children as a blended family. Carlotta enjoyed the beach as well as the mountains, most especially her trips to Beech Mountain where she was a charter member of "The Hollyhock Club". Preceding Carlotta in death besides her husbands were her parents, her grandson Jared Warren, her sister Eloise Phillips, and her son Neal Autrey Warren. Surviving to share memories are two of her sons, Frank Warren, III of Greenville, SC and Patrick Warren of Asheville. Also, a former daughter-in-law, Peggy Howland Warren who has stayed closely in touch with Carlotta before and during her illness....and took her for her 'mani/pedis' so often. Surviving stepchildren are Teresa Roberts of the Asheville area, Lamar Roberts of San Diego, CA and Pudge Roberts of Myrtle Beach, SC and his son, Drake. "Addie" adored her grandchildren. Those remaining, whom she dearly loved are Bonnie Warren of Medford, MA, William Warren of Wilmington, DE, Sarah Warren of Asheville and Annie Warren of Greenville, SC. Also surviving are her sister and brother-in-law Doris and Jim Coble of Matthews, NC and her brother, Tom Autrey of Arden, NC, as well as many nieces and nephews who loved "Aunt Coppie's" laughter, her funny (true) stories and 'unusual' recipes. A service to celebrate the life of Carlotta Autrey Roberts will be Saturday, June 11th at 1:00 P.M. at St. Paul's United Methodist Church in Asheville with the Reverend Darryl Dayson officiating. Burial will be private. Memorial contributions may be made to the donor's charity of choice.

Carlotta Autrey Roberts passed away after a lingering illness on Sunday, June 5, 2016 at Asheville Manor where she had resided for several years and received outstanding care. She was born September 30, 1929 to Thomas Carl Autrey and Doris... View Obituary & Service Information

The family of Mrs. Carlotta Autrey Roberts created this Life Tributes page to make it easy to share your memories.

Carlotta Autrey Roberts passed away after a lingering illness...

Send flowers to the Roberts family.