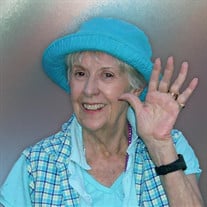 Carroll Simms Hartman, 82, of Asheville, NC passed away on December 24, 2015 at Brooks Howell Home, after battling Alzheimer’s disease. She was born September 6, 1933 in Washington, DC. She was the daughter of the late Perry Buckingham Simms and Constance Hanlein Simms. She graduated from Woodrow Wilson High School in Washington, DC and attended the University of South Carolina in Columbia. She was an editor for the Carolina Review, USC’s literary magazine, and was president of Delta Delta Delta national social sorority. It was at the Tri-Delta house where she first encountered Robert (Bob) Hartman, who was at Fort Jackson. He asked if she could help him and his friend Charlie find dates. After asking numerous times if she had found someone for them yet and being told “No”, he finally asked “Well how about you?" The rest, as you know, is history! Bob and Carroll were married September 19, 1953 in Washington, DC. They soon moved to Jacksonville, FL where Bob coached and taught at Terry Parker High School. They had 3 girls in 4 years, and somewhere in there Carroll graduated Cum Laude with a teaching degree from Jacksonville University. Bob and Carroll moved to Asheville in 1962 where Carroll continued her teaching career. She taught at Isaac Newton Elementary School for one year and then taught first grade at Ira B. Jones Elementary School for 30 years. She was a member of Kappa Kappa Iota’s teachers sorority. Upon her retirement, she reminded her fellow teachers that she had all the luggage she needed and asked for one “small” thing. She wanted a poster that had the roster of the names of students from each year she taught. I am not sure how they managed to do it, but she proudly hung that poster on her wall, with almost 1000 names on it! For Mom, this was the greatest gift ever! She was preceded in death by her husband of 59 years, Robert Lee Hartman, and her eldest daughter Tina Hartman MacManus. She is survived by Katherine Hartman Stevens of Asheville, NC; Connie Hartman Gawrych of Mount Pleasant, SC, and grandchildren Jennifer Lee Gawrych Weston of Charleston, SC and Steven Gawrych of Mount Pleasant, SC; Karen Hartman Herron, and her husband Ed of Hickory, NC and grandchildren Amy Herron of Crested Butte, CO, Brett Herron of New York, NY , and Callie Herron of Eau Claire, WI; and Tina’s husband Richard MacManus of Atlanta, GA and grandchildren Megan MacManus of New York, NY, Connie MacManus Waters of London, England, and Jane MacManus of Philadelphia, PA. . She is also survived by her sister Connie Cooper and her husband Hal of Cleveland, OH. We would like to extend a special thanks for all the wonderful caregivers at Brooks Howell Home for taking care of both Mom and Dad. We would also like to thank CarePartners Hospice, Dr. Peggy Noel of Memory Care, and Steve and Morris Funeral Home for your help and support. And also a heartfelt thanks to Harry and Genelda Woggon and all of Mom and Dad’s friends for being the greatest! In lieu of flowers, memorials may be made to the Bob Hartman Scholarship Fund, c/o Athletic Department, One University Heights, Asheville, NC 28804. The date for a celebration of her life is to be determined.

Carroll Simms Hartman, 82, of Asheville, NC passed away on December 24, 2015 at Brooks Howell Home, after battling Alzheimer&#8217;s disease. She was born September 6, 1933 in Washington, DC. She was the daughter of the late Perry Buckingham... View Obituary & Service Information

The family of Mrs. Carroll Simms Hartman created this Life Tributes page to make it easy to share your memories.

Carroll Simms Hartman, 82, of Asheville, NC passed away on December...

Send flowers to the Hartman family.