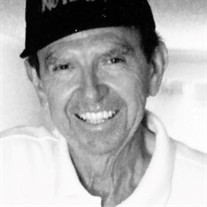 Charles Lindbergh (“Lindy”) Stevens passed away peacefully on August 3, 2020 at the WNC Baptist Home in Asheville. He was born in Marion, NC on April 11, 1929, the son of Francis and Fannie Early Stevens, and the brother of Shalott, Ogle and Kipling. After serving in the Air Force during the Korean War, he began a long and successful career as an Advertising Sales Manager for print newspapers. He rose through the ranks by taking care of valued customers who became close friends, starting with the Charlotte News where he met the love of his life, Enid Grady Stevens. Then it was on to the Detroit Free Press and the Houston Post, and finally back to the DC area, settling in with the Army Times Publishing Company and the Journal Newspapers. Lindy and Enid enjoyed splitting their time in retirement between South Florida and Charlotte where they put their passion for tennis on center court in their lives. Lindy’s adoration of tennis started at Army-Navy Country Club in Arlington, VA, then branched out to the Lauderdale Tennis Club in Fort Lauderdale and the Wellington Tennis Center near West Palm Beach, eventually landing at the Olde Providence Racquet Club in Charlotte. He treasured many lifelong friendships formed through these clubs and their mutual obsession of tennis and the outdoors. Enid was devoted to Lindy throughout their 59 year marriage, and he faithfully took care of her until she passed last year. He has missed her dearly. Lindy exhibited the true belief that if you focus on what you want in your life hard enough, put in the work and communication, and live as though it was a foregone conclusion, it would happen. He bent the world to his wishes. His favorite quote was “Persistence” from Calvin Coolidge. That determination made him not only a very good salesman, but also a force to be reckoned with. And he brought that creative grit and determination to bear for Enid and two children, Kitty Stevens Menzies (Jim), and Scott Lindbergh Stevens (Vanessa). He passed this creed down to them and his grandchildren, Madison Menzies Francis (Nathan) and JC Menzies (Abby) and was very proud of their kindness and strength of character, and the close relationships they all had. Lindy had a huge smile at the ready and a keen sense of humor, which made the family get-togethers full of laughter, and created a trove of stories and pictures for the children and grandchildren to remember, retell and relive. The family thanks the wonderful staff at the WNC Baptist Home for their gentle and tireless care of Lindy’s body and soul over the past year. Due to the current circumstances, there will only be a private celebration of life with immediate family at this time. In lieu of flowers please consider making a donation to a Stroke or Dementia organization.

Charles Lindbergh (&#8220;Lindy&#8221;) Stevens passed away peacefully on August 3, 2020 at the WNC Baptist Home in Asheville. He was born in Marion, NC on April 11, 1929, the son of Francis and Fannie Early Stevens, and the brother of Shalott,... View Obituary & Service Information

The family of Charles "Lindy" Lindbergh Stevens created this Life Tributes page to make it easy to share your memories.

Send flowers to the Stevens family.