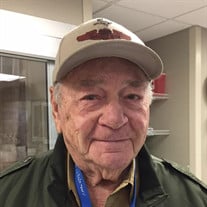 Charles ‘Charls’ Bolno (97) of Asheville, NC, passed away on Monday, July 11, 2017, at the Charles George VA Hospice. With “Pop’s” death, Asheville lost an “Asheville Living Treasure”, for which he was honored in 2015. Charls was preceded in death by his wife of 71 years, Edna. They were both born in Philadelphia, PA. Charls served as an Army Air Corps Sgt. During WWII in the South Pacific. He earned several medals, including the Purple Heart, for wounds received during combat. Charls and Edna moved to Charlotte, NC in 1957 where they lived for 50 years before moving to Greensboro, NC to be with their daughter, Robin May and her husband, Terry May. Shortly after Edna’s death in 2012, the family moved to Asheville, NC; where he lived joyfully until his death. Charls loved bringing laughter and sunshine into people’s lives; wherever he went. This was particularly true in his passion for being a volunteer at the Charles George VA center. With his special blend of humor, compassion, helpfulness and friendliness, he soon became endeared to dozens and dozens of patients and staff at the VA. Pop loved them and they loved Pop. Charls logged over 5,700 hours of volunteer work at the VA, reaching 5,000 hours in record setting time. Among his many volunteer activities, Pop also spoke at several high school classes to rapt students 80 years younger than him, about his WWII experiences. He was also a beloved member of Congregation Beth HaTephila Charls is survived by: Daughters, Robin May, Bonnie Elber, and their husbands; two granddaughters, KiKi and Ashli, and their husbands; three grandsons, Jeremy, Aaron and Jeffrey and their wives; and one adopted granddaughter Angelique; seven great-grandchildren, Aaron, Sammy, Jake, Zach, Frankie, Sadie and Tessa; plus, one great-great granddaughter Aria. Funeral services are being held 9:30 AM, Friday, July 14 at Riverside Cemetery in the Montford area of Asheville. The family would like to give special thanks to all his VA friends, staff, hospice unit, and especially his fellow volunteers for all their love and support. Because of his special love for the VA, the family suggests that in lieu of flowers, a donation be made to the Charles George VA Medical Center, “Voluntary Service”. In the memo section of the check, please write Female Veterans or GPH1009. Address for the VA Medical center is 1100 Tunnel Road, Asheville, NC 28805.

The family of Mr. Charls Bolno created this Life Tributes page to make it easy to share your memories.