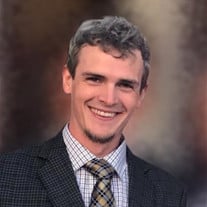 Clarence Montraville “Cory” English, IV, passed away on Thursday, October 25, 2018 at his residence. A native of Asheville, Cory was born on December 7, 1987 to Clarence Montraville “Monty” English, III and Ramona Pacheco English. Cory received this nickname from his parents at birth but was proud of his given name and his family heritage. Clarence Montraville English founded English Lumber Company in the early 1900’s and Cory often spoke of his hope to one day name his son Clarence M. English, V. After graduating from Clyde A. Erwin High, Cory studied psychology and business at AB Tech. His interests were numerous and he was knowledgeable about many subjects. Cory loved life and could light up any room. His laughter was infectious. Cory was outgoing and friendly, and he had a unique ability to connect with people. He was fiercely loyal to his family and friends and he cared deeply about people and the world. He loved nature and the Blue Ridge Parkway. His favorite spot to hike was mile marker 420. Traveling and stock market trading were two of Cory’s favorite activities. He described himself as “a world traveler” and he particularly enjoyed the many trips he took with his family. Cory was preceded in death by his grandmother, Peggy D. English; grandfather, Clarence M. English, Jr.; and a step grandfather Eugene Jones. Cory is survived by his parents; grandmother, Barbara Jones; grandfather, Milton Pacheco and wife, Cathy; his aunts, Lynn English, Elizabeth Smith and Renee Jones; his uncles, Gary Pacheco and wife, Gina, Mike Chappell and wife, Angie; numerous cousins who were all special to Cory. He is also survived by his cat, Brown! A funeral service will be held at 11:00 AM on Friday, November 2, 2018 in the Chapel of Morris Funeral Home, 304 Merrimon Ave., with Pastor Dr. Keith Hutchinson officiating. Burial will follow at Riverside Cemetery, 53 Birch Street. Cory will be buried in the same cemetery as his grandfather and his great grandfather. The family will receive friends from 5:00 PM to 7:00 PM on Thursday, November 1, 2018 at the funeral home.

The family of Mr. Clarence M. "Cory" English IV created this Life Tributes page to make it easy to share your memories.

Send flowers to the English family.