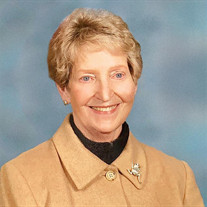 Coleman Cross Smith of Asheville, died on Saturday, December 22, 2018 at her home at Givens Estate. Named for her maternal grandfather, Coleman Shepherd, she was born on September 12, 1933 to the late William Gregory and Olive Shepherd Cross in Gadsden, Alabama. In addition to her parents, she was preceded in death by her husband, Bretney Smith, Jr.; her son, William Bretney Smith; her sister, Carol Cross Wilder Brown; and her brother, William G. Cross, Jr. Following graduation from the University of Alabama, where she was a member of Alpha Gamma Delta sorority, she taught elementary school in Birmingham. That is where she met the love of her life, Bretney. They were married on Valentine’s Day in 1959 and returned to Bretney’s hometown of Asheville to raise their children and join the family business, Swannanoa Cleaners. Coleman and Bretney enjoyed traveling and she loved summer vacations with the family at Pawley’s Island. She was a long time member of Central United Methodist Church, a sustaining member of the Junior League of Asheville, a member of Town and Country Garden Club and she enjoyed several bridge groups. Coleman loved animals – especially dogs – and through the years her home was filled with every breed imaginable. Some crazier than others but all reflected Coleman’s playful, fun spirit and sense of humor. The soap opera, General Hospital, will never know a more devoted fan nor will the Crimson Tide of Alabama. Roll Tide Roll! She is survived by her daughter, Elizabeth Stacy Smith and her wife, Susan McCreary of Asheville; her niece, Ginger Wilder Finder (Robert) of Spartanburg, SC; her nephew, Robert Wilder (Suzanne) of Columbia, SC; her nephew, Todd Wilder (Sally) of Eclectic, AL; and her brother in law, Canie N. Smith (Lynn) of Asheville. A Celebration of Life will be held at a later date and will be announced as soon as available.

Coleman Cross Smith of Asheville, died on Saturday, December 22, 2018 at her home at Givens Estate. Named for her maternal grandfather, Coleman Shepherd, she was born on September 12, 1933 to the late William Gregory and Olive Shepherd Cross... View Obituary & Service Information

The family of Mrs. Coleman Cross Smith created this Life Tributes page to make it easy to share your memories.