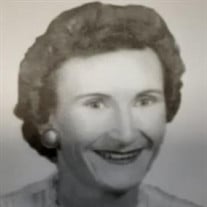 Dana Katherine Tyson of Brooks Howell Home in Asheville, NC passed away peacefully November 13, 2021. She was born on March 24, 1928 in Nansemond County, VA (now Suffolk) to the late Adelaide Jones Tyson and Allen Tyson. She was preceded in death by her brother, Roy, and her sister, Marjorie. Several cousins survive her: Patricia LaReau Benfield, Dr. Harold P. Heafner, Anne Weber, Amy Parker, Elton Jones, Doris Tyson and Craig Tyson. The family moved to Cradock, VA when she was two years old. Dana was a member of Cradock Methodist Church from an early age. Among the ways she served the church was as a Sunday School Teacher, District Chairman of Worship for the MYF, Treasurer for the United Methodist Women of Cradock Church as well as Church Historian and as a Girl Scout Leader. She graduated from Cradock High School in 1945 and began working for The Seaboard Railway. In 1950 Dana went to Greensboro College. Upon graduation she attended Scarritt College to prepare as a missionary for the Methodist Church. She was commissioned in June 1955 and set sail for the Phillipines where she served for 20 years. While in Mindanao, she served as a Conference Missionary. In 1963 the Northern Conference in the Philippines voted to open Aldersgate College. She served as Executive Dean, Professor and was also Superintendent of the Family Life program. In 1990 The Hope Development Center was dedicated in her honor. On her furloughs she further studied at Scarritt College, William & Mary Extension, Old Dominion University, Wesley Theological Seminary and American University In 1954 when black schools were closed in Prince Edward County Virginia, Dana went and taught at the Prince Edward Free School for a year. Later, in 1960, she served as a Church and Community Worker at the Choctaw Indian Mission in Pearl, Miss. A Celebration of Life will be held at Brooks Howell on December 2, 2021, at 10 am. Her burial will take place at a later date in Portsmouth, VA at Ok Grove Cemetery. Morris Funeral & Cremation Care is serving the family and condolences may be sent to them through our website at www.morrisfamilycare.com.

Dana Katherine Tyson of Brooks Howell Home in Asheville, NC passed away peacefully November 13, 2021. She was born on March 24, 1928 in Nansemond County, VA (now Suffolk) to the late Adelaide Jones Tyson and Allen Tyson. She was preceded in... View Obituary & Service Information

The family of Miss Dana Katherine Tyson created this Life Tributes page to make it easy to share your memories.

Send flowers to the Tyson family.