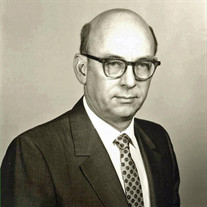 Daniel B. Mitchell (Col. USAF Ret), age 97, died April 10th at Givens Estates Health Center. He will be buried at the Veterans Cemetery in Black Mountain, NC with his wife (Wilma Hicks Mitchell), who preceded him in death, November 17, 2002. He is survived by a son, Gilbert Wayne Mitchell, daughter, Star Anna Mitchell, 4 grandsons, 1 granddaughter, 2 great grandchildren, 5 brothers, 3 sisters, 3 half-sisters, and 3 half-brothers. He graduated from the University of Chicago in 1953 with a Master of Science degree in Physical Science. Col. Mitchell served 31 years in the US Air force as a pilot and a meteorologist. He flew 25 combat missions in a B-25H and 88 missions in a P-47D30 in WWII, served as Commander of the 1st Weather Group in Vietnam in 1969, and was Commander, Air Force Global Weather Central from 1970 until retiring in 1973. After retiring from the USAF, he served with The National Oceanic and Atmospheric Administration for 9 years and retired from the Federal Executive Service in 1982 as an Executive Level 4, Director of the National Climatic Center in Asheville, NC. He served on the boards of the Asheville Buncombe County United Way, Daniel Boone Council, Boy Scouts of America, and Asheville Chapter of the American Red Cross. He was a member of the Asheville Rotary Club from 1976 and was President of the club in 1993. He was an active member of the First Baptist Church of Asheville. His family and friends will always have fond memories of his joyful smile, warm spirit, and loving heart. A memorial service will be held in the Norma F. Pulliam Chapel in Asbury Commons of Givens Estates at 1:30pm on Sunday, April 15, 2018. A funeral service will be held at 10am on Monday, April 16, 2018 at the Western Carolina State Veterans Cemetery, 962 Old US Hwy 70, Black Mountain, NC 28711. The family will receive friends from 4pm to 6pm on Sunday, April 15, 2018 at Morris Funeral Home, 304 Merrimon Ave., Asheville, NC. In lieu of flowers, contributions may be made to Givens Estates, Resident Assistance Ministries, Attn: Development, 400 Wesley Drive, Asheville, NC 28803. Condolences may be sent through the website, www.morrisfamilyfuneralhome.com

Daniel B. Mitchell (Col. USAF Ret), age 97, died April 10th at Givens Estates Health Center. He will be buried at the Veterans Cemetery in Black Mountain, NC with his wife (Wilma Hicks Mitchell), who preceded him in death, November 17, 2002. He... View Obituary & Service Information

The family of Col. Daniel B. Mitchell created this Life Tributes page to make it easy to share your memories.

Send flowers to the Mitchell family.