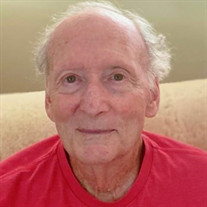 David Klein died peacefully at home on October 10, 2020. His loving wife, Gail, was at his side in the house they built together with gorgeous views of the Blue Ridge Mountains. They spent almost thirty years there, exploring trails, traveling, shopping in Asheville, making new friends, and welcoming family who came to visit. Dave was born in 1937 in Mamaroneck, New York, and spent his formative years playing baseball, needling his younger brother Arthur, and protecting pet snakes from the wrath of his mother. He attended Alfred University, which is where he met Gail and married her as soon as he could (after her graduation, two years after his). They made their way to Sunnyside, Queens, and then to Wayne, New Jersey, settling in for the long haul in Gail’s home town of Packanack around 1963—a time when Jews (and Italians) needed special permission to own property there. And there they stayed: raising a family, building careers, hosting legendary parties, taking family vacations, and finally retiring at the same time to start a new life in North Carolina in 1996. Always creative, a jack-of-all-trades, Dave was one of those guys who did it all. His cooking wasn’t great, admittedly, but he gamely persevered when necessary. His ceramic and mosaic works, however, were top notch. He used mechanics only under duress; landscapers, never; and finally gave up roof repairs after breaking his leg one fateful Father’s Day. Gail would not disagree that he was the more patient parent, the one his daughters preferred to conduct driving lessons and help with math homework. He enjoyed slapstick comedies and laughing uproariously at mildly inappropriate jokes. When his career at CBS ended after an unfathomable number of years, he dusted himself off and taught himself how to digitize his skills and stay relevant. Don’t quit, don’t quit, don’t quit was his internal mantra (even if he would never use the word “mantra.”) Dave is survived by Gail, his cherished wife of fifty-nine years; his brother, Art, and his wife, Barbara, and their children Linda and Susan; his eldest daughter, Lori, and her husband, Dave Vines, and their children, Erin and Dylan; his youngest daughter, Wendy, and her husband, Jeff Rogoff, and their children, Jonah and Anna. But he’s also survived by all the stories and jokes and moments, which live on in all of us, and in all the other lives his life has touched. His memory will always be a blessing—and a reminder: love hard and love now. Morris Funeral & Cremation Care is serving the family and condolences may be sent to them through our website at www.morrisfamilycare.com.

David Klein died peacefully at home on October 10, 2020. His loving wife, Gail, was at his side in the house they built together with gorgeous views of the Blue Ridge Mountains. They spent almost thirty years there, exploring trails, traveling,... View Obituary & Service Information

The family of David Herbert Klein created this Life Tributes page to make it easy to share your memories.

Send flowers to the Klein family.