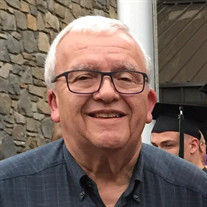 Rev. David L. Warren, 73, of Asheville passed away on Tuesday, August 6, 2019 at the John F. Keever, Jr. Solace center. He was born in Statesville, NC to Helen Rose Barkley and James Aaron Warren. A veteran of the United States Army, David served his country from 1965 to 1967. He served in Vietnam from 1966 until 1967. David and his family moved to Asheville in 1978 when he became the chair of the newly formed criminal justice program at Asheville-Buncombe Technical Community College. He taught at A-B Tech for twenty-five years prior to retirement. He held a Masters Degree in Criminal Justice from the University of South Carolina. While continuing to serve in his role at A-B Tech he became a licensed local pastor in the United Methodist Church. Rev. Warren attended seminary at Erskine Theological Seminary in South Carolina. He served multiple United Methodist churches including: Little Sandy, Fanning Chapel, Barnardsville, Mountain Valley, Emma, Bell and Grace. He also served as the assistant pastor of Asbury UMC. At the time of his death he was serving the congregation of Grace UMC. David served as a key leader in the Safe Sanctuaries program in the Western North Carolina Conference of the United Methodist Church which focuses on the protection of children from sexual abuse within the church. Rev. Warren was an active leader in the Mountain Chapter of the Order of St. Luke’s healing prayer ministry. David and his wife, Katie, were founding members of the Centering Prayer Group at Grace Episcopal Church in 2012. David continued his service to the community by working with families in need of a preacher for funerals and celebrating lives. He gave numerous families his time graciously and cared for each of them deeply. David is survived by his wife Katie S. Warren; daughter, Jennifer Warren; granddaughter, McKenna Stewart; sister, Annie Jane Harris; an aunt, Margaret Dickens and multiple nieces and nephews. David is also survived by his beloved Golden Retriever, Emma Rose. His brother, Lanny Warren preceded him in death. A Celebration of David's life will be held at 1:00pm on Friday, August 9, 2019 at Asbury Memorial United Methodist Church, 171 Beaverdam Rd, Asheville, NC 28804. The family will receive friends from 6:00 - 8:00pm on Thursday, August 8, at Morris Funeral & Cremation Care, 304 Merrimon Ave., Asheville, NC 28801. Memorial contributions in David's name can be sent to the OSL Mountain Chapter, P. O. 25116, Asheville, NC 28813 where David was an active member of the Healing Prayer Ministry.

The family of Rev. David Lee Warren created this Life Tributes page to make it easy to share your memories.

Send flowers to the Warren family.