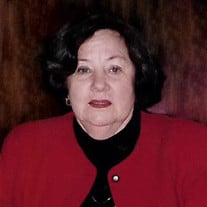 Doris Patton Giezentanner, a Buncombe County native and long-term resident of Woodfin, North Carolina, passed away on the evening of April 30, 2017, at the age of 91, surrounded by family and close friends. Doris was preceded in death by her son, John H. Giezentanner, Jr. in 2006, and her husband, John H. Giezentanner in 1970, as well as two sisters and four brothers. She is survived by her daughter, Debra Giezentanner of Woodfin; her brother, Harold Patton of Jupiter; granddaughters, Heather Israel and husband Alan of Candler, Ashley Grant and husband Matt of Woodfin; grandson, John D. Giezentanner of Asheville; granddaughter, Hannah Giezentanner-Stott and husband, Tyler, of Charleston, SC; three great-grandchildren, Skyler and Finn Grant, and McKinley Israel; and many other beloved Patton and Giezentanner nieces and nephews and sisters-in-law. Doris’s life passion was serving and helping others. Doris began her long commitment to public service on the Town of Woodfin's Board of Alderman. She and her husband John, were involved in the creation of the Town of Woodfin. She then served Buncombe, Henderson, Madison, and Transylvania counties on the Western North Carolina Health Systems Agency Board of Directors. In 1976, she ran for Buncombe County Commissioner, was elected, and served for almost four terms. As high vote getter, she was the first Buncombe County woman to serve as Vice Chairman and was also selected as a District 16 supervisor, entitling her to be on the State County Commissioner Board. She served seven years on that board, driving to Raleigh once a month. Doris served on many other boards, including the Blue Ridge Mental Health Board (12 years), Land of the Sky Regional Council (10 years), and the Asheville/Buncombe Technical College Board of Trustees. She was a charter member of Caring for Children, member of Mayor’s Downtown Commission, associate member of the Buncombe County Soil and Water Conservation District, and she was instrumental in establishing the Women’s Involvement Council. In 1989 Doris made the motion during a County Commissioner meeting, to change the Buncombe County Motto from “Men” to Match Our Mountains, as designed by Roy Fox, to “People” to Match Our Mountains. In 1991 Doris was honored with the Buncombe County “Woman of the Year” award for her many years of service in local government and specifically her role in the development of the after school program for children and her personal efforts to save 5 school buildings slated for demolition which are now community centers. The family wishes to thank the wonderful staff of Madison Health and Rehabilitation and Dr. Nettie White for her wonderful care during her rehabilitation stay. A special thanks to the Nurses and Respiratory Therapists at the Neuro ICU and Step Down unit of Mission Hospital for her transitional care. A special thanks to the Care Partner Hospice team for providing guidance and support during the last week of her life. A memorial service will be held 2:00 PM, Wednesday, May 3, 2017 in the chapel of Morris Funeral Home, 304 Merrimon Avenue, with Reverend Wesley Pike officiating. The family will receive friends from 12:00 – 2:00 at the funeral home prior to the service. Private interment will be held at Ashelawn Gardens of Memory. In lieu of flowers, please make donations to the Brother Wolf Animal Rescue at bwar.org or 31 Glendale Ave Asheville 28803

Doris Patton Giezentanner, a Buncombe County native and long-term resident of Woodfin, North Carolina, passed away on the evening of April 30, 2017, at the age of 91, surrounded by family and close friends. Doris was preceded in death by her... View Obituary & Service Information

The family of Mrs. Doris Patton Giezentanner created this Life Tributes page to make it easy to share your memories.

Send flowers to the Giezentanner family.