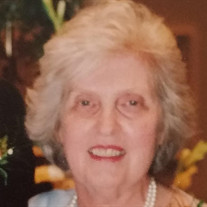 Dorothy Harrison Jackson, 88, of Asheville, passed away peacefully on Sunday, April 10, 2016 and we are grateful she is now in her eternal home with her Lord and Savior, Jesus Christ. Spending most of her life in Asheville, Dorothy was born on June 8, 1927 in Swannanoa, North Carolina to the late Ralph Harrison and Nannie Morgan Harrison. In addition to her parents she was preceded in death by her brother John Harrison and his wife, Lou; her sister, Mary Ellen and her husband, William Wolcott, Jr. She was also preceded in death by the love of her life, her husband of 65 years, Julian Jackson. Dorothy attended Lee H. Edwards High School and graduated in 1944. She participated in various volunteer positions during World War II as a teenager. She attended Asheville Biltmore College and graduated with an associate’s degree in 1946. She was a loving, devoted wife and a precious, loving mother and grandmother. Her entire life was spent in devotion to her husband and their four children. She is survived by her children, John Jackson and his wife, Sabrina, of Asheville, Jerry Jackson and his wife, Charlotte, of High Point, Nancy Jackson Stanfill and her husband, Stephen, of Acworth, GA, and JJ (Julian Joseph) and his wife, Cathy, of Shenyang, China; her three grandchildren, Lauren Grace Stanfill, Joshua Stanfill and Jonathan Stanfill; several nieces and nephews, Bill and Anne (Wolcott) Guillet, William and Debi Wolcott III, David and Geri Harrison, Rick Harrison, Jack and Peggy Harrison and Jan Harrison. She will always be remembered for her love, laughter, and positive outlook in life. She always had a special gift of encouraging others. She will be deeply missed by all who loved and knew her. A funeral service will be held at 1:00PM on Tuesday, April 12, 2016 in the chapel of Morris Funeral Home, 304 Merrimon Avenue with Reverend Clark Henderson officiating. Burial will follow at Green Hills Cemetery. The family will receive friends from 6:00PM until 8:00PM on Monday, April 11, 2016 at the funeral home.

Dorothy Harrison Jackson, 88, of Asheville, passed away peacefully on Sunday, April 10, 2016 and we are grateful she is now in her eternal home with her Lord and Savior, Jesus Christ. Spending most of her life in Asheville, Dorothy was born... View Obituary & Service Information

The family of Dorothy Harrison Jackson created this Life Tributes page to make it easy to share your memories.

Send flowers to the Jackson family.