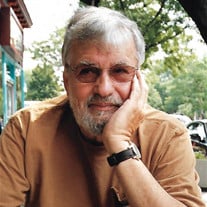 A significant figure in the world of woodworking, the Penland Community and far beyond has died at the age of 77. Douglas Sigler passed away on April 11, 2018 surrounded by family and friends after suffering a stroke and heart attack. Doug Sigler’s philosophy was “Don’t Talk About It, Do It” and he demonstrated that through a life of building, creating and teaching. He was born in Red Hook, NY, and began his formal education in wood at The School for American Craftsmen, that later became known as the Rochester Institute of Technology. Sigler would go on to teach at RIT for 25 years, later named Professor Emeritus. Doug taught side by side with colleague Bill Keyser, another outstanding designer craftsman. Their unique friendship forged the way for many of the student's achievements who worked through the SAC program. Earlier this year Penland School of Crafts named Doug Sigler Outstanding Educator of the Year for 2018. A celebration of Doug’s life will be held this summer in conjunction with acceptance of this award and the Penland Auction. A renowned furniture maker, his work has been shown nationally and internationally. He is also known for the many homes he built, each most designed by long time friend and former student, Bob Leverich. The homes are filled with a remarkable sense of space and function and his signature style cabinetry, his work combined beauty and function in daily life. Doug first taught at Penland School in 1964 and by 1978 began building his home near there. After many years of dividing his time between Rochester and his Penland area home, he retired from teaching at RIT in 2000. He was now able to spend all his time in NC where he continued to create his personally styled furnishings, build distinctive craft-driven homes and teach workshops. Doug with partner and wife Kathie created a home and studio that was a hub of activity and a gracious gathering place for woodworkers and craftsmen from around the world. Doug maintained relationships with many of his former students and was always interested in providing support, networking, advice, humor and sharing of craft and life experiences. Along with his beloved wife and partner Kathie Sigler, there are numerous family members, and countless friends, students and collectors who will long share the cherished memories, stories, and works in wood he leaves behind. Also important in Doug and Kathie’s home life over the years were their beloved canine “kids” Sneakers, Sorta, Ebony, Beau and now Happy. Memorial donations can be made to the Sigler Scholarship at Penland School of Crafts or designated to the Penland School Wood Shop.

A significant figure in the world of woodworking, the Penland Community and far beyond has died at the age of 77. Douglas Sigler passed away on April 11, 2018 surrounded by family and friends after suffering a stroke and heart attack. Doug Sigler&#8217;s... View Obituary & Service Information

The family of Mr. Douglas Sigler created this Life Tributes page to make it easy to share your memories.

A significant figure in the world of woodworking, the Penland...

Send flowers to the Sigler family.