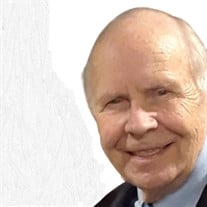 E. Ennalls Berl II died Oct 8th, 2020 at the age of 88, after a long period of living with vascular dementia. He will be remembered for his witty humor and the mischievous twinkle in his eye. Born December 7, 1931 in Wilmington DE to Floyd and Caroline Kelly Berl, he is survived by his wife Suzanne Chapin Wilkins Berl; his children: Andrea, Tia and her husband James Thomson, E. Ennalls IV, Alexandra, Charles, Christopher and his wife Elizabeth; his stepsons: Charles and David Wilkins; and seven grandchildren. Ennalls was named after his uncle, E. Ennalls Berl, who served as a father figure to him, since his own father died when Ennalls II was only two. “Ennalls the Great” (as he called his uncle) was a decorated WW I and WW II veteran and trained Ennalls to be a wine connoisseur at the age of 10. Ennalls was a graduate of Salesianum School and the University of Delaware. As a 19 year- old, he served as a sergeant in the Army during the Korean War, where he defended a Han River crossing. After the war, Ennalls became a financial analyst, a stock trader and an entrepreneur, starting a number of small businesses in different places around the country. He had a particular passion for stock analysis, which he continued to do throughout his later years. Along with the love of his life, Suzi, Ennalls retired to Asheville NC where they lived for 20 years. In Ashville, he played tennis at Aston Park with his group, the “Grumpy Old Men” and enjoyed the Panda Book Club. He spent his final years as a resident at the NC State Veterans Home in Black Mountain, where he continued to play the harmonica with gusto and often spoke in French. His family wishes to thank the devoted staff at the Veterans Home, the team at MemoryCare, and the aides from Home Instead for their wonderful care. Memorial contributions can be made to MemoryCare, 100 Far Horizons Lane, Asheville NC 28803; memorycare.org

E. Ennalls Berl II died Oct 8th, 2020 at the age of 88, after a long period of living with vascular dementia. He will be remembered for his witty humor and the mischievous twinkle in his eye. Born December 7, 1931 in Wilmington DE to Floyd... View Obituary & Service Information

The family of E. Ennalls Berl II created this Life Tributes page to make it easy to share your memories.

Send flowers to the Berl family.