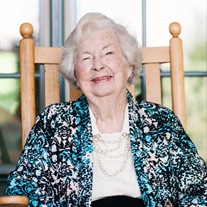 Edna Taylor Blanton, 95, of Asheville, NC passed away peacefully on Tuesday, December 24, 2019. A native of Harlowe, NC, she was born on October 8, 1924 to the late C.J. and Eleanor Taylor. She was also preceded in death by her husband, Wayne W. Blanton, Sr.; son, Wayne, W. Blanton, Jr.; two sisters, Ruth Smith and Edith Jarman and a special friend, Marguerite McLawhorn. A graduate of Beaufort High School, Edna began attending Blanton’s Business College in 1940. While there, she met the love of her life and they were married on October 24, 1942. She went on to graduate from Blanton’s and then Bowling Green State University in Kentucky. Edna became the owner of Blanton’s Junior College, where she served as the President and Chairman of the Board, she remained associated with the College until 1992. She held a NC Realtor license, and was a member of the Asheville Country Club, The American Business Women’s Association – Hy Hopes, Women’s Civic Club, State Advisory Committee for Private Business and Trade Schools in NC, served on the Board of Director’s of the NC Association of Business Colleges and volunteered with the Eliada Home and St. Joseph’s Hospital Guild. She was a member of First Baptist Church. She enjoyed traveling and visited many countries in her lifetime. A kind and caring heart for all, Edna wanted the best for everyone and loved her family and friends. Survivors include her daughter, Kay Blanton Davis; sister, Hazel Ives; grandchildren, Jamie Davis & great-granddaughter, Hadley of Asheville, NC, Joseph Davis & wife, Stephanie & Great-Grandsons, Hudson & Parks of Atlanta, GA, Joni Davis, her special "Guardian Angel" of Asheville, NC, Wayne Blanton "Trip" & wife, Malina & great-grandson, Isaac of Fletcher, NC, Angelica Blanton of Cherokee, NC; sister-in-Law, June Madison of Wichita, KS and several nieces and nephews. A memorial service will be held 2:00 PM, Saturday, January 11, 2020 in the Chapel of Morris Funeral & Cremation Care. The family will receive friends one hour prior to the service, beginning at 1:00 PM. Interment will follow at Riverside Cemetery, 53 Birch Street, Asheville, NC. A celebration of life will be held at a later date at Edna’s childhood favorite church, Harlowe United Methodist Church in Newport, NC. A celebration of life will be held at Harlow United Methodist Church at a later date. In lieu of flowers, memorials may be made to the Harlowe United Methodist Church, 5129 Hwy. 101, Newport, NC 28570.

Edna Taylor Blanton, 95, of Asheville, NC passed away peacefully on Tuesday, December 24, 2019. A native of Harlowe, NC, she was born on October 8, 1924 to the late C.J. and Eleanor Taylor. She was also preceded in death by her husband, Wayne... View Obituary & Service Information

The family of Edna Taylor Blanton created this Life Tributes page to make it easy to share your memories.

Send flowers to the Blanton family.