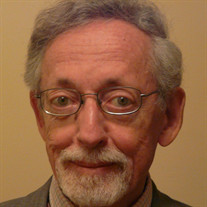 Edwin L. Brown passed away peacefully on March 27, 2017 surrounded by love and family at the Brooks-Howell Home in Asheville, NC. Born April 6, 1929 and raised in Asheville, he graduated from the Asheville School in 1946. Edwin graduated from Haverford College in 1950 with a Bachelor of Arts. His major was Archaeology, with a minor in Classical Languages. He would occasionally hitchhike the over 600 miles between Asheville and college. Edwin was a Fulbright Scholar at the American School of Classical Studies in Athens, Greece in 1950-51. A Conscientious Objector, he provided alternative service with the Mennonites in West Virginia and Chicago before working in Greece in 1953-54 with the World Council of Churches to assist with refugee resettlement. There, he met lifelong friends Maria and John Christopher, who eventually moved to Chapel Hill, NC with sponsorship from Edwin's mother, Lelia Mitchell Brown of Asheville. The Christophers and their children thrived in Chapel Hill and the families enjoyed many New Year's celebrations together, discussions of modern and ancient Greek, a shared interest in teaching young people, and travel to the Christophers' beach house. Edwin completed his PhD in Classics at Princeton University in 1961 and taught at Duke University before teaching in the Classics Department for several decades at UNC-Chapel Hill. A teenage correspondent of Albert Einstein, Edwin in his 60s corresponded with King Hussein of Jordan in an effort to head off the first Gulf War. They foresaw the cataclysmic consequences of US military intervention in that part of the world borne out by later events. Around this time, Edwin became a strong supporter of Palestinian rights and freedom and, in time, a supporter of Jewish Voice for Peace. This grew out of his support for equal rights and desegregation in the American South and opposition to the war in Vietnam. He was a regular at Peace Action events in Chapel Hill. A gentle soul, he had "the fire in the belly" when it came to promoting justice, peace, and equal rights, often in quiet ways of engaged citizenship that looked to the future and the interests of generations to follow. His research and teaching at UNC-Chapel Hill reflected his broad interests and lively curiosity, ranging from Latin poetry (especially Vergil) to Greek didactic poetry, the early Greek gods, and Greek and Roman astronomy, especially constellation names. He was particularly interested in the connections between the early Greeks and the Near East, an area of research that led him to study the Greek god Poseidon, the enigmatic early script known as Linear A, and numerous other thorny fields of inquiry. Following a 2009 trip to Cairo -- where he and hundreds of others were physically set upon by Egyptian security forces -- in an unsuccessful effort to reach the besieged Gaza Strip, Edwin flew to Tunisia to investigate a long-standing idea about Homer and Odysseus and his travels. In 2016 he endowed the Henry and Sally Immerwahr Graduate Student Excellence Fund in the UNC Classics Department in honor of his dear friends and former colleagues. He is survived by sons Michael F. Brown of Asheville and Michael's wife Ameena Batada and their children Amrit and Rayhan, as well as son Benjamin Van Luong Brown of Boone, NC, sister Mary Ida Sprague, and beloved nephews and nieces in various parts of North Carolina and Louisiana. His love of family ran deep, perhaps a consequence of his own father, Hugh Crawford Brown, Sr., passing away when Edwin was age nine. His mother, Lelia Mitchell Brown, lived in Asheville until her death in 1979. She instilled in her four children, including Eleanor Brown Hall and Hugh Crawford Brown, Jr., a wonderful sense of love for one another and the wider community that endured in all well into their 80s. His wife, Nicolette Friederich Brown, who died on March 20, 2009, was the great love of his life. Their daughter, Mollie Isabel Brown, died on March 4, 1972. Edwin, a Quaker, lived a full and remarkable life and will be missed by old friends and new ones made in the final years of his life. The wisdom and love he shared with so many will live on in the many lives he touched. In lieu of flowers, contributions can be made to Jewish Voice for Peace or the Henry and Sally Immerwahr Graduate Student Excellence Fund at UNC. A memorial service is being planned for June 18, 2017 at 1:30 PM in the chapel of Brooks-Howell Home, 266 Merrimon Avenue. Please contact Michael Brown with any questions at 828-424-0081 or [email protected]

Edwin L. Brown passed away peacefully on March 27, 2017 surrounded by love and family at the Brooks-Howell Home in Asheville, NC. Born April 6, 1929 and raised in Asheville, he graduated from the Asheville School in 1946. Edwin graduated from... View Obituary & Service Information

The family of Dr. Edwin Louis Brown created this Life Tributes page to make it easy to share your memories.