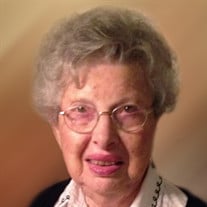 Elizabeth Gilstrap died Thursday, March 16, 2017, at the John F. Keever, Jr. Solace Center. She was born in Savannah, GA in 1916 and celebrated a joyous 100th birthday last November with many family members and friends in attendance. She, with her husband John, moved from Ft. Lauderdale, FL to Asheville in the fall of 1968. John was with the Asheville Coca-Cola Bottling Company. She was very active in her community. She was a member of Central United Methodist Church, serving on a number of committees and a member of the Sarah Circle. She was also a charter member of P. E. O. Chapter AC and belonged to the Beverly Hills Garden Club and the Friday Book Club. In addition to her parents, she was preceded in death by John, her husband of 49 years, as well as four sisters and three brothers. Elizabeth is survived by her daughter, Pam Hinson of Asheville; son, Mark Gilstrap (Ingrid) of Gardnerville, NV; brother, the Rev. Jean Guerry of Coconut Creek, FL; granddaughter, Megan Gatewood (Colin) of Atlanta, GA; three great-grandsons, Sam, Embry and Carter Gatewood, and a number of nieces and nephews. A memorial service will be held, Tuesday, March 21, 2017, at 2 p.m. at Central United Methodist Church with Dr. Robert Blackburn, Jr. officiating. The family will greet friends in the Fellowship Hall following the service. In lieu of flowers, the family requests donations be made to Care Partners Hospice Memorial Fund, P. O. Box 25338, Asheville, NC 28813 or the Central United Methodist Church Foundation, 27 Church Street, Asheville, NC 28801. The family would like to thank Dr. Lucian Rice for his compassionate medical care over the many years.

Elizabeth Gilstrap died Thursday, March 16, 2017, at the John F. Keever, Jr. Solace Center. She was born in Savannah, GA in 1916 and celebrated a joyous 100th birthday last November with many family members and friends in attendance. She, with... View Obituary & Service Information

The family of Mrs. Elizabeth Victoria Guerry Gilstrap created this Life Tributes page to make it easy to share your memories.

Send flowers to the Gilstrap family.