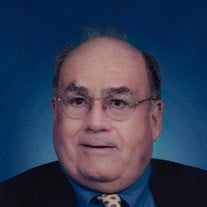 Eugene Morrison Carr, Jr. (known affectionately as “Bob”), 96, of Asheville, NC, died peacefully on August 12, 2021, at Deerfield Retirement Community. Bob was born in Detroit, MI on December 19, 1924, to Dr. Eugene Morrison Carr and Dr. Catherine Creighton Carr, both graduates of Johns Hopkins Medical School, Baltimore, MD. In 1926 he and his parents moved to Asheville for his father to begin practice as a tuberculosis specialist. Bob attended St. Genevieve’s of the Pines 1931-1938 and Asheville School 1938-1943. In 1943 he entered the U.S. Army and served as the Company Clerk in Calcutta, India in the 691st Base Equipment Company in the China Burma India Theater. His company reassembled heavy equipment taken off ships that were sent by British rail to keep the Lido and Burma roads open so trucks could continue moving over the Himalayas into China. He then attended Yale University from 1946-1950 and graduated with a B.A. in Political Science/International Relations. While at Yale, he was a member of St. Anthony Hall, served as a Deacon at Battell Chapel, and was a member of the Army ROTC. April 19, 1952, Bob married Emily Battle Schuber Carr. Bob worked for Bemis Lumber Company in Robbinsville, NC from 1952-1954. He returned to Asheville in 1954 to work for Jack Veach in the Educational Lumber Company. He bought Educational Lumber Company in 1960 and continued to run it until his retirement in 1995. Bob demonstrated through his daily life and actions his unselfish love of his church, community, and others. He was active at Trinity Church Asheville beginning in 1954. He served as Sunday school teacher/young people’s leader, usher, vestry member, junior warden, chalice bearer, and lector. He also served on various committees for the Episcopal Diocese of Western North Carolina and served as an officer for the Episcopal Foundation. Devoted to his community, he was Commissioner of the Town of Biltmore Forest 1963-1977 and Mayor of Biltmore Forest 1977-1981. His other community involvements included supporting the Asheville School, the Yale Alumni Association of Western NC where he was active as a regional alumnae candidate interviewer, the Civitan Club of Asheville where he served as President 1972-1973, the Board of Asheville Country Day School, now Carolina Day School, the Biltmore Forest Country Club Board of Directors, and the Cradle of Forestry Board of Directors. Additionally, starting in 1954, he was a member of the Rhododendron Royal Brigade of Guards, and when he moved to Deerfield Retirement Community, he served on various boards there where he was also a regular driver for Meals on Wheels. His hobbies included photography and travel, particularly to his beach home on Hilton Head. He is predeceased by his wife, Emily Battle Schuber Carr (June 30, 1998) and survived by his two children: Eugene Morrison Carr III, married to Sallie Malmo Carr, (Hendersonville, NC) and Catherine Emily Carr Lincoln, married to the Rev. Matthew R. Lincoln (Buffalo, NY). Affectionately known as “Bop-Bop” and “Boppie” he is also survived by his grandchildren: Dorothy Adeline Carr Harrison (Durham, NC), Gabriel Bourne Larkin (Pittsburgh, PA), Sarah Emily Carr Ford (Charlotte, NC), Jane Tucker Lincoln (Brooklyn, NY), and John Schuber Carr (Hendersonville, NC). A funeral service will be Saturday, September 4, 2021, at 9:30 am at Trinity Episcopal Church with a coffee reception immediately following in the courtyard. Current Covid-19 guidelines will be followed. In lieu of flowers, memorial donations may be made to Lake Logan Conference Center and Camp Henry or The Cradle of Forestry In America.

The family of Eugene "Bob" M. Carr Jr. created this Life Tributes page to make it easy to share your memories.

Send flowers to the Carr family.