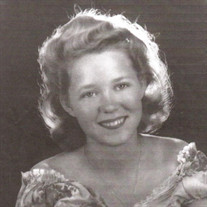 Florence Barziza Floros, age 92 of Arden, North Carolina, departed this life peacefully Friday evening, April 5, 2019 at the John F. Keever Solace Center in Asheville, North Carolina. Florence was born January 9, 1927 in Houston, Texas. She was the oldest of four children. She met Nicholas Floros in Houston, Texas while Nick was in the Navy and stationed in Houston before his deployment to the Pacific during World War II. After the war, Florence and Nick married on August 25, 1946. They were married 55 years. Following their wedding in Houston, they moved to Atlanta, GA where Nick attended Georgia Tech on the GI Bill. While in Atlanta, they had the first two of their three children. After Nick’s graduation from Georgia Tech with a chemical engineering degree, they moved to the Asheville area (Enka, then Arden) where they remained the rest of their lives. Florence was the Assistant Parish Secretary at Trinity Episcopal Church in Asheville, NC for many years. Even after her retirement, she continued to volunteer at Trinity, as well as Mission Hospital, where she earned multiple volunteer awards for her faithful service. She was a long-time member of Trinity Episcopal Church and her church community was a vital and central part of her life. She was well-loved and known for her kind and gentle spirit. Florence was preceded in death by her husband, Nicholas Floros; three younger brothers, Buddy Barziza, Eddie Barziza and Bobby Barziza, all of Houston, Texas. She is survived by her three children; Penny Stevens (Vince) of Chapel Hill, NC, Steve Floros of Asheville, NC and Maria Dry (Tim) of Fletcher, NC. Florence is also survived by her only grandchild, Shelby Pohlman (Matt), of Chapel Hill, NC and two great-grandsons, Nicholas and Will Pohlman, of Chapel Hill. A service to celebrate the Resurrection to Eternal Life will be held on Tuesday, April 9 at 2 pm at Trinity Episcopal Church with interment following immediately at Calvary Churchyard in Fletcher, NC. In lieu of flowers, please consider a donation to the John F. Keever Solace Center, 21 Belvedere Road, Asheville, NC 28803 or the Alzheimer’s Association at www.alz.org.

The family of Florence Barziza Floros created this Life Tributes page to make it easy to share your memories.

Send flowers to the Floros family.