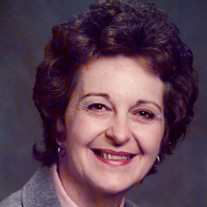 Mary Frances Morehead, 83, died on Sunday, April 17, 2016 at the John F. Keever, Jr. Solace Center. A native and lifelong resident of Asheville, she was born on January 15, 1933 to the late, Morgan Oscar Miller and Ethel Buckner Miller. In addition to her parents she was also preceded in death by her two sisters, Dorothy Ann Miller and Wilfa Fran Brooks. Frances was a graduate of Lee Edwards High School. On April 21, 1952 she married the love of her life, James “Jim” Douglas Morehead. After Jim left the service they bought her parents feed store and Morehead Feed Company was born. Frances and her mother were active in operating the greenhouse and had a great love for their customers. In the mid 1970’s they became Morehead Company and decided to shift the focus of the store away from agriculture and onto wholesale grocery. They sold the business to enjoy retirement in 1996. Frances loved to travel. She and Jim circled the globe more than once, taking month long breaks from the store to see the world. A tradition held to late into their retirement. Frances was an avid gardener, and was a talented artist and painter. Her family takes comfort in being surrounded by those paintings today. She is survived by her loving husband, Jim Morehead; her son, James Richard “Rick” Morehead and his wife, Marcia, of Asheville; her grandson, Scott Richard Morehead of Asheville; several nieces and nephews; and her two beloved dogs, Buttons and Corky. Frances was a devoted wife, mother and grandmother. She will be truly missed by all that knew and loved her. A graveside service will be held at 1:00PM on Wednesday, April 20, 2016 at Elk Mountain Cemetery on Church Road in Asheville with Reverend J. Curtis Goforth officiating. The family will receive friends from 6:00PM until 8:00PM on Tuesday, April 19, 2016 at Morris Funeral Home, 304 Merrimon Ave.

Mary Frances Morehead, 83, died on Sunday, April 17, 2016 at the John F. Keever, Jr. Solace Center. A native and lifelong resident of Asheville, she was born on January 15, 1933 to the late, Morgan Oscar Miller and Ethel Buckner Miller. In... View Obituary & Service Information

The family of Mrs. Frances Morehead created this Life Tributes page to make it easy to share your memories.

Send flowers to the Morehead family.