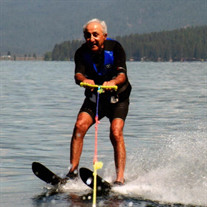 Frederick Donald Motney (Moses), beloved father of Lenore (Lovoi, husband Paul), Fred Jr. (wife Beth), and Diane (Wilkey, husband Tony), grandfather of Jonathan and Mary Grace Motney and Tony Jr. (wife Brittany), Rob, and Sarah Jane Wilkey, and doting husband of the late Marguerite Virginia ("Chickie") died of pneumonia on Tuesday, January 26, 2016 at the age of 90. A consummate salesman, Fred managed Allen's Shoe Store in downtown Detroit in the 1950's and sold cars for Jefferson Chevrolet for over forty years beginning in the early 1960's, often winning "salesman of the month." He was warm, charming, intelligent, funny, and fiercely devoted to his family, including his large, extended Syrian-American family. His favorite hobbies were reading, listening to classical and jazz music, and walking and riding bikes with his soul mate of 52 years, Chickie. After she died in 1999, Fred continued their winter get-aways to Palm Springs, CA, where he swam, biked, and played tennis under the dry desert sun. In the spring and summer, Fred enjoyed card games with the "Syrians" at the Woods Park, tennis with the Senior Men's Club of Grosse Pointe, and exercise at the local fitness center. During Fred's later years, his brother Don Moses cared for him by cooking delicious Syrian food and getting him to and from doctors' appointments and church. Fred's health began to decline significantly in the spring of 2014, and in October of that year, he moved to Asheville, NC to be near his daughter Diane. As he was a life-long member of Christ Church, Detroit, Fred's memorial service will be held there at noon on Saturday, April 9th, and his ashes will be placed in the church columbarium next to Chickie's. He will be greatly missed by all who knew him. In lieu of flowers, the family asks that any memorial donations be sent to Christ Church Detroit, 960 E. Jefferson Ave., Detroit, MI 48207 with "for Syrian refugee support in memory of Fred Motney" written on the memo line.

The family of Frederick Donald Motney created this Life Tributes page to make it easy to share your memories.

Send flowers to the Motney family.