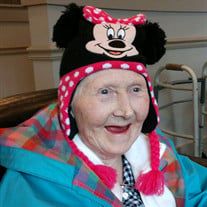 Gloria Lonzene Tate, at the age of 77, went to be with her beloved and best friend, Jesus Christ on Sunday, August 25, 2019 AD. Gloria also dearly loves her precious aunt, Pauline Tate Pasour of Bessemer City, NC and cousins, Ann Scism & Jeanne Homesley of Kings Mountain, NC, Rob Rea of Montclair, VA and Nanette King of Oak Ridge, TN. Gloria was “Miss Popularity at the wonderful skilled nursing home, Pisgah Manor in Candler, NC. For months on end, she wheeled around from room to room bringing joy, sharing, “talking” stuffed animals, smiles and her twinkling, expressive eyes! The love between her and the loving staff was mutual. When Gloria’s health was starting to fail her, Meg Thompson, the R. N. spent the last two months arriving one hour early for her shift and staying one hour later in order to sing and pray with Gloria. Gloria was always eager to learn. Her fabulous encouraging tutor, Laura McKeithen, raised the bar on Gloria’s reading confidence. Everyone from Gloria’s family care home, dear St. Mary Ross’s administrator, Gail Atkinson to all Gloria’s friends and neighbors & caretakers were constantly delighted to be around Gloria and her unique come backs and sayings: For example when Gloria wanted folks to know she was bright and smart, she would say “I see said the blind man!” or “I wasn’t born yesterday!” When surprised, she repeated her dear friend, Debra Mattison, by saying, “Oh my stars and candy bars!” She had special names for special people and special places. The holy chapels in St. Lawrence Basilica and St. Barnabas that held the true presence of God for adoration, Gloria called “the quiet place”. Almost all her friends were called “frisky britches”. Before her daddy, Lawrence Buford Tate passed away, Gloria always loved to ride with him in his antique model T Ford. Gloria would say my "Daddy Rabbit" drove real fast. "Boy Howdy, he was in the Navy and we was cadillacing boats too". She took loving care of her mother, Opal Sargent Tate for many months before Opal died. Gloria was preceded in death also by her grandparents, Fletcher Bowman and Mina Holland Tate of Bessemer City, NC and Lon and Mable Hicks Sargent of Asheville, NC. When Gloria was living at her home at 77 Bassett Road, she would always be sure to scout out all her neighbors to advertise her December 8th birthday party. She was hostess and queen for a day and showed complete joy at receiving tons of puzzles, M & M’s, performing battery operated toy and the love and friendship coming from her favorite people’s hearts. Most especially her beloved Godfather, Michael Oligny. Nancy England and cousins galore would often travel good distances to be with Gloria. Gloria would often accompany her neighbor/trustee, Barbara Freeman to visit the elderly at various nursing homes. There Gloria would hold and pat outreached hands and tell each soul that Jesus loved them and add “and I love you too!” Her funeral Mass will be 10:30 AM, August 29, 2019 at the church of her baptism, St. Barnabas in Arden. The Rosary will be the night before right after the 6 pm daily Mass. Gloria, Jesus loves you and we love you too!

The family of Gloria Tate created this Life Tributes page to make it easy to share your memories.

Gloria Lonzene Tate, at the age of 77, went to be with her beloved...

Send flowers to the Tate family.