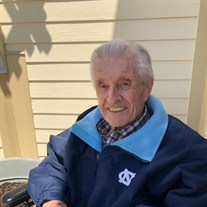 H. Donald “Don” Robertson, age 92, left his earthly home on Friday, January 8, 2021, in Warminster, Pa., to be reunited in Heaven with his beloved wife of 53 years, Mary. Don was born on September 6, 1928, in Winston Salem, NC, to the late Tom and Mildred Robertson. He grew up in Asheville, NC, with Gordon, Rex, and Bill Owen along with his brother Tommy Robertson. All the boys saw Les and Eula Owen as their parents as well. Don later became an announcer for WSKY in Asheville after graduating from UNC-Chapel Hill with honors. Don proudly served in the USAF as Captain. He continued his career as a sportscaster at WBTV in Charlotte, NC, and as the play by play broadcaster for Davidson College. He eventually became known as the Voice of CBS Sports in NY and Host of American Airlines” Music til Dawn.” Don would most like to be remembered for his love of Jesus Christ, his Lord, and Savior. He was well known as a soloist in many local churches and was a Trustee at Nanuet Baptist Church in NY. He has temporarily left behind his three children, Donny, Debbie, and Mike. He is also survived by ten grandchildren and ten great-grandchildren who will cherish his memory. Remembrance gifts may be donated to DREAM Ministries, PO Box 300, Glendale Springs, NC 28629. A private graveside service will be held at Riverside Cemetery in Asheville, NC.

The family of H Donald Robertson created this Life Tributes page to make it easy to share your memories.

Send flowers to the Robertson family.