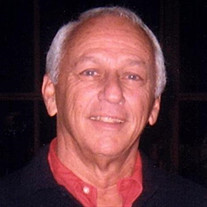 Harold “Sonny” Coleman Enloe, of Asheville, died Monday, June 19, 2017. Sonny was born on August 25, 1941 to the late Ruth and Harold Enloe. Sonny was a native Ashevillian but lived and traveled literally throughout the world. He is survived by his son, Keith Coleman Enloe; Keith’s Life Partner, Patricia Wigginton; two grandsons, Coleman and Michael Enloe and Sonny’s Partner of Love, Marzy Israel. In addition to his parents, Sonny was preceded in death by his wife, Martha Osborne Enloe. Sonny’s accomplishments are almost too numerous to mention. He excelled as a star halfback for the Lee Edwards High School Football Team. He then went to North Carolina State University and became an active member of the SAE Fraternity. Sonny took a break his sophomore year to join the United States Marine Corps where he was a radio operator and received the Meritorious Performance Award. Martha and Sonny were married in 1964 and lived in New York City where he worked for Eastman Kodak. After completing a Masters of Business Administration degree at the University of North Carolina, Chapel Hill, Sonny went to work for the American Enka Corporation. This allowed him and his family to live in Wuppertal, Germany and to travel widely in Europe. Upon returning to Asheville, Sonny rose in the ranks with American Enka, becoming President in 1982. This was also the time that he developed his passion for sailing: his lifelong passion. Stewart Coleman, Bob York and Sonny sailed across the Atlantic Ocean in 1989, later crossings were the Pacific Ocean, many from Charleston to the British Virgin Islands and Bermuda. Sonny’s love of the sea brought him to buy a 1925 party house at Sullivan’s Island, SC which became his fulltime home in 2006. Its interior totally resembled that of his sailboats with large charts of his ocean voyages. Sonny’s strong enthusiasms extended to fun, fast cars, mostly Porsche’s but also vintage Austin Healy’s. He skied the major western slopes and motorcycled to as far as South Dakota, Labrador and Nova Scotia. After leaving American Enka, Sonny bought and ran many businesses. The last of which was Cooper House Kitchens. He was a member of the University Club in New York City and The British Yacht Club. While in Asheville, Sonny served on several boards including The Airport Authority, The Mission Hospital Board, The Water Commission, The United Way and others. In Spite of his fast pace and many endeavors, Sonny was an intent and compassionate listener. He would go out of his way to help friend or stranger. A private interment will be held in the Urban Garden at Grace Episcopal Church. A celebration of Life for all will happen in The Century Room at Packs Tavern on Tuesday, June 27, 2017 at 5:00PM. Parking is available in the adjoining city lot. Memorial contributions may be made to the Wounded Warrior Project, PO BOX 758517, Topeka, Kansas 66675 or to the American Diabetes Association 2451 Crystal Drive, Suite 900 Arlington, VA 22202.

Harold &#8220;Sonny&#8221; Coleman Enloe, of Asheville, died Monday, June 19, 2017. Sonny was born on August 25, 1941 to the late Ruth and Harold Enloe. Sonny was a native Ashevillian but lived and traveled literally throughout the world.... View Obituary & Service Information

The family of Harold "Sonny" Enloe created this Life Tributes page to make it easy to share your memories.

Send flowers to the Enloe family.