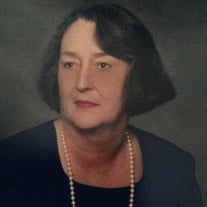 Harryette B. Coxe, 81, of Asheville died Tuesday, January 10, 2017 at her residence. She was born in Asheville on April 24, 1935 to the late Eunice Glenn Boardman and Harry M. Boardman. Her grandparents were John Frazier and Eunice Glenn. She attended St. Genevieve of the Pines and graduated Ashley Hall, in Charleston, SC. She then attended Salem College and UNCA. She was a member of Asheville Junior Assembly, The Old Maids Club, The Junior League (Asheville and Durham), March of Dimes Birth Defects Foundation, and The American Lung Association of North Carolina, Western Division. She was also active in many volunteer organizations in Asheville, Durham, Huntington, WV, New Berlin, NY and Springfield, Ohio. She was a member of the Biltmore Forest Country Club. She also was a member of Trinity Episcopal Church where she was a Daughter of the King, taught Sunday school, was a member of the Alter Guild and served on the Out Reach Committee. She savored life. She was consummate hostess and was happiest when bringing people together to celebrate all the occasions of living. She and her husband Bill traveled extensively and enjoyed experiencing not only different cultures, but various modes of travel. Harryette was devoted to her family and extended her devotion to include so many people. There was always room for one more whether at the table or under her roof. Generous to a fault she would always do what she could wherever she saw a need. She was preceded in death by her husband, William F. P. Coxe, Jr., and is survived by one son, Robert W. Adams, Jr.; three daughters, Ruth Adams Goodson (Wayne), Mary Adams Culbertson (Wally) and Jennifer Adams Davis (Roger); three step-sons, William F. P. Coxe, III, Francis Field Coxe (Flo) and Lyman Beecher Coxe; 11 grandchildren and 4 great-grandchildren. Harryette was blessed with several wonderful caregivers: Mimi Stroup, Katie Hall, Jessica Holcombe, Jennifer Owenby, and Randy Henderson, who with their tender care brought joy to her days and comfort to her life. The family is grateful for the support and compassion provided by the nurses and staff of Care Partners Hospice. Memorials may be made to Trinity Episcopal Church, 60 Church St, Asheville, NC 28801 or the Alzheimer’s Association, 4600 Park Road, Suite 250, Charlotte, NC 28209. A funeral services will be held at 2:00pm, Saturday, January 14, 2017, at Trinity Episcopal Church with The Rev. Dr. R. Scott White officiating. Burial will follow at Calvary Episcopal Churchyard. The family will receive friends at the Biltmore Forest Town Hall beginning at 4:30p.m.

Harryette B. Coxe, 81, of Asheville died Tuesday, January 10, 2017 at her residence. She was born in Asheville on April 24, 1935 to the late Eunice Glenn Boardman and Harry M. Boardman. Her grandparents were John Frazier and Eunice Glenn. She... View Obituary & Service Information

The family of Mrs. Harryette B. Coxe created this Life Tributes page to make it easy to share your memories.

Send flowers to the Coxe family.