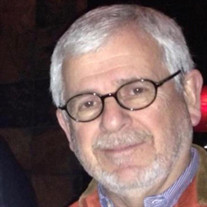 Asheville, NC - Mr. Jack Baber, Jr, 78, slipped the surly bonds of this earth to touch the face of a loving God in the early hours of February 14, 2021 following a lengthy battle with Parkinson’s Disease. Jack was the first born son of the late Jack “Big Jack” Baber and Anne Garrison Baber, arriving on June 5, 1942 in Shelby, NC. Following “Big Jack’s” service in World War II the family made Asheville, NC their home. Jack graduated from A.C. Reynolds High School where he played football and baseball. He then went to what would become one of the loves of his life, Clemson University. Like many in the mid-1960s, Jack was drafted into the U.S. Army where he was later stationed at Fort Gordon in Augusta, GA. There Jack showed a proficiency and taught signalmen Morse Code which he liked to call “dot dot dash.” Following his service, Jack returned to Asheville where he established himself in the real estate market and later founded Baber Appraisal Service. He was proud to note that his North Carolina appraisal license number was #51. In addition to his business involvement, Jack was a longtime member of Central United Methodist Church and the Country Club of Asheville. All who were able to know Jack soon learned of his quick wit and sense of humor. He was very quick to turn punny phrases into what his family referred to as Jack-isms. Though, you would have to be paying close attention to his soft spoken nature. Just as easy as Jack’s ability to spread the gift of laughter was his ability to open his heart and share the gift of love. He will be remembered as a kind and gentle man, a loving husband, father, grandfather and friend. Preceding Jack in death are his parents - Jack Baber and Anne Garrison Baber and his brothers - Thomas Allen Baber and Joe Garrison Baber. Left to cherish Jack’s memory is his loving wife Michelle Cochrane Baber, his daughter Angela Moore Lytton (Al), his son Robert Brandon Moore (Jessica) and his sister Iris Anne Gaddy (Northal). Additionally, Jack is survived by his grandchildren: Chloe, Sydney and Caelan Moore; and AJ, McKenzie and Worth Lytton, as well as his nephews Richard and Northal Gaddy and niece Hannah Gaddy. Special family memories will also be cherished with Jack’s mother-in-law Edna Cochrane, and sister-in-law Charlotte Cochrane Brock. Michelle and the family would like to give special thanks to the caregivers and front line workers at Brooks Howell and to the care of Doctor Patel. A service will be held at a later date.

Asheville, NC - Mr. Jack Baber, Jr, 78, slipped the surly bonds of this earth to touch the face of a loving God in the early hours of February 14, 2021 following a lengthy battle with Parkinson&#8217;s Disease. Jack was the first born son of... View Obituary & Service Information

The family of Jack Baber Jr. created this Life Tributes page to make it easy to share your memories.

Send flowers to the Baber family.