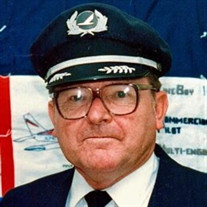 Captain Jack Linwood Miner, 94, of Asheville, NC passed away October 11, 2021, after declining health at Brooks Howell Home where he was a resident. Born June 30, 1927, in Norfolk, VA. Jack was preceded in death by his parents, Ernest Linwood and Ida Virginia Gregory Miner, wife, Winifred (Renie) Davis Miner, brothers, George J Miner, Ernest F Miner, James E Miner, sister, Mabel I Miner, infant son, Jack L Miner Jr and son, Bruce A Miner. He is survived by his son, Rev David (Lori) Miner of Troutman, NC and Mark (Amy) Miner of Advance, NC and daughter in law, Teresa Miner of Viera, FL. He is also survived by eight grandchildren, James (Teresa) Miner, Patrick (Sarah) Chipley, David (Alex) Miner Jr, William Miner, Rachael (Joshua) Stewart, Jacquelyn (Auston) Miner Patrick, Karla (Peter) Freeman, Alana (Judson) Hand and thirteen great-grandchildren. Jack was active for over 45 years at Sharon United Methodist Church in Lewisville, NC. Prior to that an active member of Haygood Methodist Church in Virginia Beach, VA, the Gideon’s of Winston-Salem and also a strong supporter of the Boy Scouts of America leading troops in Virginia and North Carolina. Growing up in a family of carpenters, Jack’s early work was in construction but it was while serving in the Army Air Corps that he found his love for aviation and flying. It was while in service that he met the love of his life Renie and their marriage lasted for over 66 years until Renie’s passing in 2013. He earned his pilot’s license in 1947 and in 1957, he began work with Piedmont Aviation at Norfolk Municipal Airport to build his flight proficiency. He later was hired on with Piedmont Airlines as a First Officer on the DC-3 in 1961. In 1966, he transferred from Norfolk to Winston-Salem as Captain. For over 26 years Captain Jack “Big Daddy” Miner proudly flew for Piedmont before his retirement in 1987. Throughout his career in aviation, Jack fostered a passion for serving others through service in missions where he could share his Christian faith but also the skills as a carpenter that he learned as a child. Jack and Renie were very active in the United Methodist Church locally, throughout the Western North Carolina Conference and also globally. Soon after his retirement from Piedmont Airlines he and Renie became very involved in Habitat House Building teams and United Methodist Volunteer in missions building teams. He started the Diengenga Trade School at Lodja in the Democratic Republic of the Congo. The Central Congo Annual Conference renamed the school in 2012 to the Jack & Renie Miner Technical Institute in recognition of their continued heartfelt support for the advancement of education in the region. Their passion for service in the Congo created a bond with the Congolese that will last for many years. Jack also maintained his Piedmont Airlines connection with the Piedmont Silver Eagles in the Winston-Salem area making sure they held monthly breakfasts to recount memories well after their retirements until his health started to decline. His love for what he did, wherever he was, could be seen in his big smile and passion for humor. The family would especially like to express appreciation to the staff and employees of Brooks Howell Home for their outstanding care of Jack while he was a resident there. A memorial service and celebration of life will be held 3:00 pm, Sunday, October 24, 2021, at Sharon United Methodist Church, 5330 Sharon Church Road, Lewisville, NC followed by visitation with the family. The family requests that any Memorials may be placed in Jack’s Honor to The Jack & Renie Miner Technical Institute in Diengenga, DRC https://umcmission.org/advance-project/3021397/ or the Sharon United Methodist Improvement Fund, Sharon United Methodist Church, 5330 Sharon Church Road, Lewisville, NC 27023. Morris Funeral and Cremation Care is serving the family and condolences may be sent to the family at www.morrisfamilycare.com.

Captain Jack Linwood Miner, 94, of Asheville, NC passed away October 11, 2021, after declining health at Brooks Howell Home where he was a resident. Born June 30, 1927, in Norfolk, VA. Jack was preceded in death by his parents, Ernest Linwood... View Obituary & Service Information

The family of Captain Jack Linwood Miner created this Life Tributes page to make it easy to share your memories.

Send flowers to the Miner family.