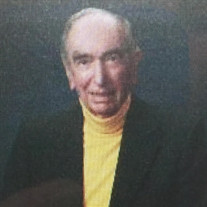 Jack Mitchel, 97, rounded third base and crossed over home plate Monday October 3rd, 2016 at Charles George VA Medical Center after brief complications from pneumonia. He was born on May 1, 1919 in Welch, West Virginia and raised in Cincinnati, Ohio. He was on the swimming team at both Hughes High School in Cincinnati, Ohio and at Ohio State University. One of his many accomplishments was being farmed out to the Boston Braves. He played ball until he gallantly enlisted in the US Navy in World War II. In 1942, he proudly served his country in the North African invasion. After having been injured and recovering in the Naval Hospital Norfolk, Virginia, he was then transferred to the US Naval Convalescent Hospital in Asheville, North Carolina, at which time he met his loving wife Lieutenant J.G. Lynette Mages Mitchel, RN. After the War they were married on January 26, 1946 and remained in Asheville. Their amazing marriage lasted 70 years. He worked as an insurance broker with Equitable Life for almost 60 years. He was the first president of the PTA of St. Eugene's Catholic School, president of the Asheville Jaycees, and a member of the Asheville Country Club. He coached Little League baseball in Asheville and was an avid golfer, tennis player, and bridge player. His great passion in life was indeed his family and friends. Jack is survived by his wife, Lynette, four children Roger Mitchel (Betsy) of Southern Pines, North Carolina, Colleen Mitchel Smith of Huntsville, Alabama, Lynette Rozar (Bob) of Mount Pleasant, South Carolina, Diane Mitchel of Alpharetta, Georgia, six grandchildren, Caitie and Willa Mitchel, Chris Rozar (Melissa), Sarah Rozar Sanderson (Noah), and Greg Rozar, Nathan Smith, and one great-granddaughter, Ana Rozar, and his sister, Betty Healy. He was a great father and provider. A Mass will be said in his honor Saturday, October 8th, 2016 at 10 a.m. at St. Eugene's Catholic Church followed by an internment of his ashes in the church's columbarium. The family will receive friends at Morris Funeral Home, 304 Merrimon Avenue from 5:00 - 7:00 PM. Friday, October 7, 2016. In lieu of flowers, donations and contributions can be made to the charity of your choice. We the family would like to express our appreciation and gratitude for the exceptional care he received from the medical staff at the Charles George VA Medical Center.

Jack Mitchel, 97, rounded third base and crossed over home plate Monday October 3rd, 2016 at Charles George VA Medical Center after brief complications from pneumonia. He was born on May 1, 1919 in Welch, West Virginia and raised in Cincinnati,... View Obituary & Service Information

The family of Mr. Jack Mitchel created this Life Tributes page to make it easy to share your memories.

Jack Mitchel, 97, rounded third base and crossed over home plate...

Send flowers to the Mitchel family.