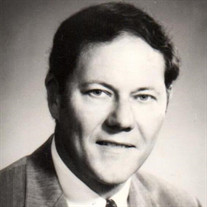 James E. Burt, III, son of the late James E. Burt, Jr. and Corneille Burns of Benton, Louisiana, passed away on Wednesday, March 21, 2018, surrounded by his family following a lengthy illness. A native of Benton, Louisiana, he was born on July 23, 1937, the son of a pioneer Bossier Parish farm family that migrated to Ivan, Louisiana following the Civil War. He and his wife, Judith, have lived in North Carolina for the past twenty-eight years. Jim is survived by his wife of 59 years, Judith Clower Burt, and their three children, James E. Burt IV of New York City, Prentiss C. Burt and his wife Helen Thompson Burt, of Houston, Texas, and Corneille Burt Algarra and her husband, Mario A. Algarra of Atlanta, Georgia, and three grandchildren, J. Prentiss Burt, Mary Helen Burt, and Raybourne E. Burt. A career banker, Jim served as president of the State First National Bank in Texarkana¸ Arkansas from 1973 until 1980, when he accepted the position of president and CEO of Commercial National Bank in Shreveport. In 1990, Jim and Judith moved to Lincolnton, North Carolina, where Jim continued his banking career. At the time of his retirement in 2001, Jim was chairman of First Charter Corp., headquartered in Charlotte, North Carolina. Jim was a graduate of the Oklahoma Military Academy, Louisiana State University, and the Stonier Graduate School of Banking in Rutgers, New Jersey. While at LSU, Jim was a member and president of Delta Kappa Epsilon fraternity and played on the varsity baseball team. He and Judith, who also attended LSU, met their freshman year and were married during their senior year on November 28, 1958. Upon graduation from LSU in 1959, Jim was named a Distinguished Military Graduate, commissioned a Second Lieutenant in the United States Army, and served in the 6th Armored Calvary. After receiving an honorable discharge, Jim spent several years farming and then began his banking career at the First National Bank in Shreveport, Louisiana. A community and business leader throughout his career, Jim served as president of the Texarkana, Arkansas, Chamber of Commerce in 1977, president of the Shreveport Chamber of Commerce in 1984, and as president of the Louisiana Bankers Association in 1988. Jim was named Shreveport’s Outstanding Young Man of the Year in 1971, and served on the board of directors for Southwestern Electric Power Company in Shreveport for thirteen years beginning in 1977. While in Lincolnton, Jim was instrumental in establishing the Lincoln County Community Foundation, a regional affiliate of the Foundation for the Carolinas. A lifelong Presbyterian, Jim held numerous leadership positions in the church including church Elder, member of the church Session, and member of the church’s finance committee. Jim also took great joy in devoting his time and leadership skills to the Swannanoa Valley Christian Ministry in Buncombe County, North Carolina, an allied service arm of the church. Jim was a loving father and is fondly remembered by his children for leading the family on countless summer camping trips and winter ski vacations, his tireless efforts coaching their little league baseball teams, taking them water skiing and duck hunting, and attending Corneille’s basketball games throughout her junior high, high school and college basketball years. Jim was also a passionate golfer and will be sorely missed by his golfing buddies. A memorial service will be held at 10:00 a.m. on Monday, March 26, 2018, at Black Mountain Presbyterian Church in Black Mountain, North Carolina. A visitation will be held from 5:00 p.m. to 7:00 p.m. on Friday, March 30, 2018, at the Osborne Funeral Home in Shreveport, Louisiana, followed by a graveside service at 11:00 a. m. on Saturday March 31, 2018, at Forest Park Cemetery in Shreveport. The family requests that in lieu of flowers, memorial donations be made to the Swannanoa Valley Christian Ministry Unrestricted Endowment Fund, P. O. Box 235, Black Mountain, North Carolina, 28711, https://www.svcministry.org. Honoring Jim as pallbearers will be A. Sydney Burt, Jr., Quintin T. Hardtner, III, John K. Johnson, Russell J. Ogilvie, III, William C. Peatross, Scott J. Pias, Jack S. Resneck, John F. Stroud Jr., and C. Cody White. The family wishes to express its profound gratitude to the Mission Health Organization, CarePartners Hospice Solace Center, and especially Dr. Clay Ballantine, all of Asheville, North Carolina.

The family of Mr. James E. Burt III created this Life Tributes page to make it easy to share your memories.