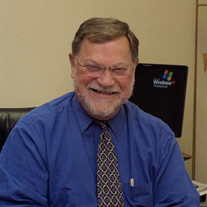 James W. Daniels, “Jim”, died in the evening of September 7, 2016 ending a jam-packed, whirlwind, generous life. He is survived by his beloved wife, Ellie, his children, Jami and Neill, two grandchildren, his adored nieces and their families, his sister and her family, treasured cousins, and one grand-dog. Jim moved to Asheville with his father in his teens and attended Lee Edwards High School and Asheville Biltmore College, which would become UNC-Asheville. He served in the Air Force during the Korean conflict. After service, he returned home to help his parents with what was at the time, a small secretarial service. After his father’s death, Jim parlayed that company into The Daniels Group, a communications business that has supported many and carved out a key place in Asheville’s business landscape. He was a clever and fearless businessman. A champion of the city of Asheville, he was integral to the revitalization of our mountain town. His successes are many, but of few of his favorite and most storied accomplishments were the founding of Bele Chere and Mountain GreenWorks, the shaping of the Downtown Association, years of service to the Chamber of Commerce and the Tourism and Development Authority and various community boards. Jim was active politically and served on the Board of Transportation under the Hunt administration. Well known for his sometimes biting humor and wit, he had a charm and magnetism that created friends wherever he went. He loved his family, his friends, his business, and this town. He will be missed terribly, but his legacy will remain. In lieu of flowers, please consider a memorial donation to the Central United Methodist Church Foundation, or to UNC-Asheville. A memorial service will be held at Central United Methodist Church on Tuesday, September 13, 2016 at 11:00am with Dr. Rob Blackburn officiating. A reception will follow in the fellowship hall.

James W. Daniels, &#8220;Jim&#8221;, died in the evening of September 7, 2016 ending a jam-packed, whirlwind, generous life. He is survived by his beloved wife, Ellie, his children, Jami and Neill, two grandchildren, his adored nieces and their... View Obituary & Service Information

The family of Mr. James W. Daniels created this Life Tributes page to make it easy to share your memories.

Send flowers to the Daniels family.