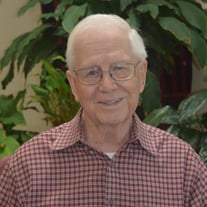 James R. (Jim) Hipkins, 91, died February 15, 2019, at the Brooks-Howell Home in Asheville, NC. Born in Toledo, OH, on July 13, 1927, he was the only child of the late Thomas Corwin and the late Dorotha Mae Hipkins. He grew up in Leipsic, OH. In response to World War II, Jim withdrew from high school in 1944 to enlist in the Army Officer’s Training School. He was in active service 1945 through 1947, serving in an anti-tank division in several countries of the European Theater, including Italy and Germany. Upon discharge, he served in the US Army Reserves until 1950. He suffered from several service-related injuries throughout his lifetime. Jim attended Ohio State University and graduated from Ohio Wesleyan University in 1951. He received a Master of Divinity degree from Boston University in 1954 and was ordained as a Methodist clergyman at Lakeside, OH. Between 1954 and 1963, he was the minister for Methodist churches in Willshire and Branch Hill, OH, and he was the founding minister of a new church, now known as Church of the Savior, in Montgomery, OH. In 1963, Jim and his wife Charlotte were trained for missionary service at the Missionary Orientation Center, Stoney Point, NY. They learned Chinese at the Institute of Far Eastern Languages, Yale University, and studied Southeast Asian cultures and linguistics at Drew University. From 1963 through 1972, they worked as missionaries for the Board of Global Missions. Jim taught theology in the Chinese language at the Methodist Theological School in Sibu, Sarawak (Borneo), and, while there, he was also superintendent of Tulai Methodist Schools. During his last two years as a missionary, he taught at Trinity Theological School in Singapore. In 1972, the Hipkins family returned to Ohio, where he served the West Ohio Conference in churches at Zanesville, Oakwood (Dayton), Whitehouse (Toledo) and Mount Washington (Cincinnati). He worked for the (Quaker) American Friends Service Committee between 1979 and 1981. Charlotte, to whom he was married for 55 years, was always a strong, supportive partner in each of his work assignments. In addition to his ministry, Jim served as Justice of the Peace in Van Wert County. He was an active member of the Kiwanis Club and a Free Mason in the order of the Scottish Rite. He started the Pierce Street Community Center in Zanesville, Ohio. He retired to Sevierville, TN, in 1990 and to Brooks-Howell Home in Asheville, NC, in 2009. During retirement, he enjoyed painting, and he became a good artist. Jim’s parents, T.C. and Dorotha Hipkins, as well as his wife, Charlotte Wahl Hipkins, preceded him in death. Jim’s survivors include his wife of 11 years, A. Gail Hipkins of Asheville, NC; children, Jill Hipkins-Pond (Don) of Massillon, OH, and Tom Hipkins (Anastasia) of San Diego, CA; grandchildren Amanda Hipkins of Calabasas, CA, Olivia Hipkins of Minneapolis, MN, Jack Hipkins of West Hollywood, CA, Abigail Pond of Canton, OH, and Michael Pond of Akron, OH. He is also survived by Gail's children, Ethan Paul Mazarakis (Nancy) of Long Beach, CA, and their sons Paolo and Alexander; Philip Mazarakis (Helen) of Malden, MA, and their children Alexandra and James; and Mary Carlson (Will) of St. Johns, MI, and their children Laura Corser (Marvin), George Corser and John Corser; and great-grandsons Tristan and Darien Corser. A celebration of the life of James Richard Hipkins will be held on March 18, 2019, at 3:00 pm in the chapel at Brooks-Howell Home, 266 Merrimon Avenue, Asheville, NC. In August, 2019, his ashes will be interred after a remembrance service at Sackett Cemetery at Lakeside, OH. Jim requested that, instead of flowers, contributions be made for “a scholarship fund for Chinese pastors in Malaysia to further their education.” He said, “You know that I believe this: that it is only in the deep experiences of living that we may discover the true meanings in life.” Such a fund has been established, and contributions can be made at https://www.gofundme.com/james-and-charlotte-hipkins-memorial-fund. The family wishes to thank Morris Funeral Home and Brooks-Howell Home for their kind services, and the Asheville Friends Meeting who will serve refreshments after the memorial service.

James R. (Jim) Hipkins, 91, died February 15, 2019, at the Brooks-Howell Home in Asheville, NC. Born in Toledo, OH, on July 13, 1927, he was the only child of the late Thomas Corwin and the late Dorotha Mae Hipkins. He grew up in Leipsic,... View Obituary & Service Information

The family of Rev. James "Jim" Richard Hipkins created this Life Tributes page to make it easy to share your memories.

Send flowers to the Hipkins family.