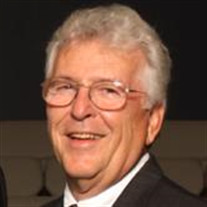 James (Jim) L. Wilson passed away on March 11, 2020, after a battle with cancer. Jim was born in Columbus, Ohio, in 1942, to the late Byron Charles and Arminta Creech Wilson. Jim grew up in Ohio and graduated from Worthington High School in 1960. While in high school, Jim was a dedicated athlete and on the wrestling and baseball teams and chosen captain of his football team two years. He continued playing football while attending Otterbein University, where he earned his business degree. Jim attended the Naval Officer Candidate School in Newport, Rhode Island, and was stationed in San Diego, CA as an officer in the navy from 1966-1969. He served as a Lieutenant JG on the Destroyer USS Charles Wedderburn during the Vietnam War. After the navy, he lived in Illinois, then Texas for about 30 years working in commercial real estate before retiring and moved to Asheville, NC in 2007. He coached his young son’s baseball team, took his daughter to Indian Princess retreats, and enjoyed going to Galveston beaches. He was happiest when near or on the water, fishing and sailing. He loved always having a faithful canine companion like his dogs through the years: Sugar, Casey, and Mariah. More recently, Jim enjoyed learning about the North Carolina history and took some classes at their local college. He kept track of his genealogy and learned some interesting things about his ancestors. Jim and Susan loved to take walks around their hilly neighborhood and would go to the nearby lake to fish or launch his remote-controlled sailboat. His neighbors in Asheville along his walking route will miss his visits and their dogs will miss the treats he would reward them with, and all will remember his tradition of dressing up in a gorilla suit for Halloween. He is survived by his wife of 24 years, Susan Cole Wilson, his children Robert (Lynsey) Wilson of Lantana, TX, and Christine (Chuck) LaStrapes of Gonzales, LA, five grandchildren: Maya, Elise, Sawyer, Rylan, and Harlow, sisters Judith Wilson of Columbus, OH, and Jennifer Wilson (Marc Bridgham) of Raleigh, North Carolina and their families, step-children Carter McNabb and Katie Nery and their children. There will be a private service for the family. Donations can be made in memory of James L. Wilson to Grace Village Medical Clinic, https://thegracevillage.com/giving, or to the veteran’s charity of your choice.

James (Jim) L. Wilson passed away on March 11, 2020, after a battle with cancer. Jim was born in Columbus, Ohio, in 1942, to the late Byron Charles and Arminta Creech Wilson. Jim grew up in Ohio and graduated from Worthington High School... View Obituary & Service Information

The family of James "Jim" L. Wilson created this Life Tributes page to make it easy to share your memories.

Send flowers to the Wilson family.