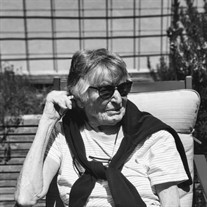 There was a time, if you can believe it, that when you told people you were from Asheville, they would respond “Nashville?” The French Broad Greenway and River Arts district were non-existent. There were no places on the French Broad to put in canoes or other watercraft. The banks were littered with tires, car parts, trash, and who knows what else. The water itself was polluted from industrial and sewage waste. Now, people say, “Oh I love Asheville.” The river is a major draw for residents and tourists alike. Jean Webb was one of the people that changed that. Jean Williamson Webb was born in Asheville in 1932. She died after a long, full life at 90. She grew up loving the land and the Asheville community. She was “not satisfied with the status quo” to quote her sister, Mariella DuMont, so she set about volunteering and leading changes both in the river and the community. As the executive director of Quality Forward from 1978 to 1983, she led trash cleanups around the community. She always had loved the French Broad and had a vision that it could be a center for a clean, vibrant Asheville. She organized a river cleanup day. The first year, 15 people showed up. In the second year, more than 60 did. She believed if people used and enjoyed the river, they would take care of it. After five years at Quality Forward, she resigned and became president of the French Broad River Foundation. She helped organize Riverfest to raise money for the Foundation, worked with county and city leaders to develop access to the river, and organized Streamwatch groups to monitor pollution. Slowly all these efforts began to make a difference. Riverlink is an outgrowth of the French Broad River Foundation. She also served as its President. The name was chosen very deliberately. It represents the linking of interested people, organizations, government agencies, and most importantly, the citizens and visitors to Asheville to the river. She once said, “I am committed to this community. I just hope that people will realize the value of the beauty around us.” As dedicated as she was to the river and the environment, she was even more committed to her family, friends, church and the University of North Carolina. She was the wife of Robert S. “Chic” Webb, and they raised four children together. Chic preceded her in death, and she missed him every day. Jean was “there” for people. She showed up and with kindness gave of herself. She was part of an ever-evolving group of Tuesday hikers who used those treks through sun, snow or rain to sustain each other through the joys and hardships of their lives. Even after breaking her hip in her eighties, she went to the church on Saturday mornings to help serve the homeless at Saturday Sanctuary. She is survived by her children: Julia Webb Gaskin, Stan Webb, Laura Webb, John Webb, Jeep Gaskin, John Hoskins, and Cristina Perez; her grandchildren Sarah Gaskin, Alex Gaskin, Forrest Gaskin, Jean Louise Webb, Graham Webb, Grace Webb, and Nathan Ellis: and one great-grandchild, Nora Jean Ellis. She will be deeply missed by all of them. Her memorial service will be held at the First Presbyterian Church, 40 Church Street, at 11:00 AM on April 22nd, with Reverend Patrick Johnson officiating. Masks will be required for the service. The service will be live-streamed at – https://www.fpcasheville.org. A reception will follow at the church. In lieu of flowers, the family requests donations to Riverlink – https://riverlink.org or Homeward Bound – https://homewardboundwnc.org. Information is available at the Morris Funeral and Cremation Care website -https://www.morrisfamilycaregroup.com/

There was a time, if you can believe it, that when you told people you were from Asheville, they would respond &#8220;Nashville?&#8221; The French Broad Greenway and River Arts district were non-existent. There were no places on the French Broad... View Obituary & Service Information

The family of Jean Williamson Webb created this Life Tributes page to make it easy to share your memories.

There was a time, if you can believe it, that when you told people...

Send flowers to the Webb family.