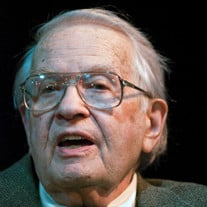 John Anthony Bridges, born May 20, 1927, in Asheville, died November 22, 2015 at Givens Health Care Center. He was the only child of the late Carl Calvin Bridges and Nancy Belzora Chrisman Bridges. John graduated from Lee Edwards High School in 1943 and then attended Asheville-Biltmore College (now UNC Asheville) for two years. Stricken by polio in 1944, he was successfully treated at home by an aunt, a former U. S. Army nurse; he then enrolled at UNC Chapel Hill, where he joined the Carolina Players and Phi Mu Alpha, the nation’s oldest music-oriented fraternity. Following graduation in 1947, he spent a year in Alaska with his parents, where he directed plays for a nascent community theater group. He returned to Chapel Hill to earn an MA in Theater in 1949, where he later earned an MA in Library Science. In 1951 John moved to New York and became manager of the Steinway Concert Hall; while there he also performed as a soloist in many churches. Following the death of his father in 1956, he returned to Asheville; for the next 29 years he was on the staff of the Buncombe County Library, where, as head of the Exhibition Room in the old Pack Library, he worked with Friends of the Library as he established the library’s first phonograph record collection, its film and book programs for children, and an educational film program that became one of the library’s basic services. Later, as Director of Community Activities, he spoke to community groups, wrote for Asheville newspapers, edited the library’s newsletter “Happenings,” and introduced countless students to the services of the library. In January 2011, the children’s reading room at Pack Memorial Library was named in his honor. John was an actor and singer in Asheville for more than 75 years. His stage debut came at age seven, when he played Prince Valiant in a 1934 production of Prince Charming. In high school he was active in theater productions under legendary teacher Dr. Elizabeth Welch, and while at Asheville Biltmore College he performed with the student theater troupe and with the Players Guild, a precursor of Asheville Community Theater. Beginning in 1946, its founding year, John performed in more than 60 ACT productions, making his last appearance in 2009 in the Autumn Players' production of Mornings at Seven. He is well remembered for musicals such as 1776, Fiddler on the Roof, Oliver, and Annie, and plays as diverse as The Crucible, Look Homeward, Angel, and Blithe Spirit—plus one of his favorite roles, the witch in Hansel and Gretel. He also appeared as a guest artist in at least 15 productions at UNC Asheville and served for many years as cantor and as tenor soloist at area synagogues and churches. For 30 years John hosted “Tea and Symphony,” a Friday program designed to prepare audiences for the coming weekend’s Asheville Symphony Orchestra performance. He wrote reviews for The Asheville Citizen-Times from 1968 to 1996, and then for the ASO website. He was a dedicated supporter of the Asheville Chamber Music Society (ACMS), Asheville Bravo Concerts, and Brevard Music Center, and maintained his annual subscription to ASO until his death. John led many groups on overseas tours to experience theater, opera, and symphony performances in European capitals, avidly studying Russian, French, and German in preparation for his travels. He also addressed Asheville’s Pen & Plate club, of which he was a long-time member, on numerous occasions. John also helped to develop the curriculum for UNC Asheville’s College for Seniors at the Center for Creative Retirement (now Osher Lifelong Learning Institute). He joined the faculty in its inaugural year, 1988, and taught more than a dozen courses in art history, dramatic literature, and film analysis. In 2012 John was recognized by Asheville Living Treasures for his lifelong dedication to the arts. And, in the words of the plaque presented by the Buncombe County Public Library System upon his retirement, “John was one of those rare persons whose lives become indistinguishably melded with the work that they do.” John is survived by cousins in western North Carolina and Ohio plus a host of friends near and far. Before his death he donated his vast collection of books and music to support Friends of the Library. A special memorial sale of the “John Bridges Collection” is scheduled for Friday, Dec. 4, 2015, at Pack Library, 67 Haywood Street. The funeral will be held at Morris Funeral Home, 304 Merrimon Avenue on Friday, Nov. 27, 2015, at 2:00 p.m., with visitation beginning at 1:00 p.m. He will be interred in Riverside Cemetery. Morris Funeral Home is in charge of arrangements.

The family of John Anthony Bridges created this Life Tributes page to make it easy to share your memories.

Send flowers to the Bridges family.