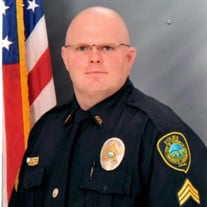 Sgt. John Thomas Rikard, 38, of Clyde, died on Wednesday, December 9, 2015. A native of Black Mountain, John was born on November 12, 1977 to the late Robert Vann Rikard and Barbara Moring Rikard. He was a 1997 graduate of Owen High School where he played football and was the1997 State Champion in the Heavyweight Division for Wrestling. He was inducted in the Owen High School Hall of Fame in 2013. He attended Western Carolina University and graduated from Appalachian State University with a bachelor’s degree in criminal justice and a master’s degree in political science. In June of 2003 he began working with the Asheville Police Department. John enjoyed working out, making jokes with his friends, fishing with his brother-in-law, watching sports and his beloved Georgia Bulldogs. He loved his bulldog Bristol and loathed but tolerated Nicole's dog Copper. More than anything in the world, he loved his son, Tucker. John is survived by his loving wife, Nicole (Gonnelli) Rikard; his beloved son, Tucker Thomas Rikard; his aunt, Pat Thomas and her husband, Billy of Nahunta, GA; his cousins, Jeff Thomas and his wife, Tammy,Cindy Sullivan of FL, Kristen Thomas and her husband JT with their boys,Garrett and Gannon, Magan Thomas Barnhill and her husband George all of GA; his mother-in law, Barbara Treu Gonnelli of Boca Raton, FL; his father-in-law Paul Gonnelli III and Vivian of Frankfort, KY; his brother-in-law Billy Gonnelli and his wife Ashley of Palm Harbor, FL; his niece Harbor Rose Gonnelli; and his best friends: Bill McGee, Jakey Jacobson, and Josh Hill. So many more extended friends and family including Katie and the Allison family; his work team that he supervised and watched over: Tyler Garrett, Lara Lemons Raymond, Heavan Dunne, Doug Williams, Robert Lanning, and Bobby Beard. And of course all of his Brothers and Sisters in Blue that he spent many hours, days, and time with working side by side. A funeral service will be held at 10am on Friday December 18, 2015 at Biltmore Baptist Church with APD Chaplain Tim Brady officiating. The family will receive friends from 4pm to 7pm on Thursday December 17, 2015 at Morris Funeral Home, 304 Merrimon Ave. In lieu of flowers, memorial contributions may be made to https://donatenow.networkforgood.org/jonathanrikard or to Owen High School Athletics football and wrestling (Black Mountain, NC) in John's memory.

Sgt. John Thomas Rikard, 38, of Clyde, died on Wednesday, December 9, 2015. A native of Black Mountain, John was born on November 12, 1977 to the late Robert Vann Rikard and Barbara Moring Rikard. He was a 1997 graduate of Owen High School... View Obituary & Service Information

The family of Sgt. John Thomas Rikard created this Life Tributes page to make it easy to share your memories.

Send flowers to the Rikard family.