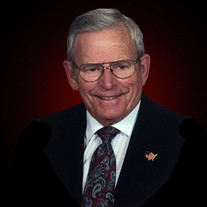 John D. Smith, 84, of Asheville passed away peacefully on Friday, August 24, 2018 at home, surrounded by family, after a long battle with cancer. He was born on March 31, 1934 in Sault Ste. Marie, Michigan, the eighth of nine children of Jim and Mayme Smith. He was preceded in death by his parents; brothers, Jim, Bob, Bill and Wayne; sisters, Burma and Marva and his loving wife, Dorothy. He is survived by his wife, Jo Anne; daughter, Kim Miller (Jon); son, Jeff (Lucia); brother, Tom of Kalamazoo, MI; sister, Betty Wourms of Columbia, SC; grandchildren, Eryn Miller, Katie Miller, Ryan Miller, Justin Smith, Daniel Smith; great-grandson, Asher Hall and daughter-in-law, Julie Leach Smith. John loved singing and was very active in Barbershop singing, where he was a longtime member of the Asheville Chapter Chorus, a member of the Barbershop Quartet “Dixie by Choice” and the Frank Thorne Chapter of the Dixie District of SPEBQSA (Society for the Preservation and Encouragement of Barbershop Quartet Singing in America). He served in many leadership roles in Barbershoppers, including President of the Dixie District and was inducted into the Dixie District Hall of Fame in 2016. He was also active in church, serving as an Elder or Deacon on several occasions. He served as an Usher at Groce United Methodist, volunteered on many community service projects including Habitat for Humanity, Katrina Relief, the Pumpkin Patch and The Welcome Table. He was a leader in Boy Scouts for a time and coached Little League Baseball for several years. John was always a hard worker and “retired” three times. First, he “retired” from Sears, Roebuck and Company as Commercial Sales Manager after 25 years. He then “retired” from Allied Insulation as a Sales Manager. Finally, at 80, he retired from Brooks Howell Home as the Director of Environmental Services. *UPDATE* The Memorial Service HAS BEEN RESCHEDULED at Groce United Methodist Church, 954 Tunnel Rd, Asheville, NC, FOR Saturday, September 29, 2018 at 1:00 PM with a visitation/reception to follow at the Church. In lieu of flowers, donations can be made in his memory to the Groce United Methodist Memorial Fund 954 Tunnel Rd, Asheville, NC 28805.

John D. Smith, 84, of Asheville passed away peacefully on Friday, August 24, 2018 at home, surrounded by family, after a long battle with cancer. He was born on March 31, 1934 in Sault Ste. Marie, Michigan, the eighth of nine children of Jim... View Obituary & Service Information

The family of John D. Smith created this Life Tributes page to make it easy to share your memories.

John D. Smith, 84, of Asheville passed away peacefully on Friday,...