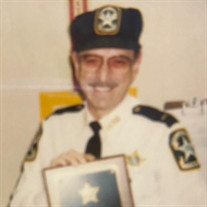 Joseph Franklin Lauro passed away two hours after his 94th birthday on Thursday, July 9,2020 from complications exasperated by Covid 19. He was the middle child of six born to Pietro and Rafaella Lauro. Leaving Sorrento, Italy in the 1920’s they made their home in the Red Hook section of Brooklyn where Pietro worked as a foreman at the Brooklyn Navy Yard. The family owned and rented brownstone houses which were maintained by Joseph and his three brothers. Here he honed his skills as a carpenter, a talent he practiced and enjoyed his entire life. He spent his professional career with the NYC Department of Corrections, first as a corrections officer and then as a captain managing the art department of the Brooklyn House Of Detention. He never ceased to be amazed by the artistic talent within the walls of BHOD and always influencing his inmate’s creativity and advocated for the arts as a regular part of the jail’s educational curriculum. In the 1970’s he assisted and consulted with conceptual artist Owen Morell on his acclaimed sculpture ASYLUM; a scale model of a prison cell suspended high in the air atop the American Thread Building on West Broadway in Manhattan. He once made the Daily News when he thwarted an escape attempt by picking up a bench and tossing it into the corridor where it stopped onrushing escapees. As a result, he wore a back brace for the next twenty years. (but NEVER went out on “disability”). He as well helped produce the BHOD’s annual Christmas show; a live variety show with a cast of actors, dancers, musicians and singers all culled from within the walls of the BHOD. The show was a highly anticipated annual event open to the families of inmates, staff and city officials. During the Civil Rights Era (circa 1967) there was a controversy among the inmate actors regarding the singing of Irving Berlins’ "White Christmas", the shows grand finale song. Shortly before the show’s premier the inmate performers refused to sing the song as they perceived its lyrical connotations suggested Christmas as an exclusively “white” holiday. My father solved the problem by substituting the word "White" with "RIGHT" and the show went on. After retirement from BHOD, he was hired by the Pinellas County (Florida) Jail where he revamped their outdated jail system to help them gain accreditation. The outcome, after several years of research was a county jail system considered one of the best in the country. For his last ten working years, up until 2015, working with his son, he tapped into a lifelong interest in current events creating text descriptions for circa 1920s-1970s archival newsreel films. Painstakingly describing their contents of historic events in minute detail, these "logs" are now part of the permanent on-line research database of Historic Films Archive. Documentary film producers access the logs and films to assist in their search for specific historical "footage" for use in their film productions. A devoted family man and skilled carpenter, he was always the one the family summoned when a new room addition or bathroom renovation was needed. His home in Massapequa Park was so beautifully renovated that to this day, 40 years after moving to Florida and two generations of owners later, the houses façade he created, down to large “L” painted in black script on the garage he built remains. He is survived by his wife of 70 years Isabel, his children Deborah and Joseph, son-in law, Al and daughter-in-law, Karen, and his grandson, Oliver. Services for Mr. Lauro will be held at a later date. Morris Funeral and Cremation Care assisted the family and condolences may be sent to the family through our website at www.Morrisfamilycare.com.

Joseph Franklin Lauro passed away two hours after his 94th birthday on Thursday, July 9,2020 from complications exasperated by Covid 19. He was the middle child of six born to Pietro and Rafaella Lauro. Leaving Sorrento, Italy in the 1920&#8217;s... View Obituary & Service Information

The family of Joseph Franklin Lauro created this Life Tributes page to make it easy to share your memories.

Send flowers to the Lauro family.