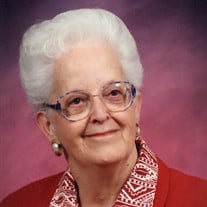 Joyce Louise Anderegg, 94, of Asheville, NC, passed away on December 20, 2015, at Brooks-Howell Home. Born September 1, 1921, in Warren, PA, Joyce was the oldest of four children of Carl and Mercedes Anderegg. Joyce returned home from Houghton College during World War II to help her parents care for her sister Marilou, who had been left paralyzed after a childhood illness. Joyce worked her way up to a management position at Sylvania Electric, where she was employed from 1950-1979. After retirement from Sylvania, she relocated to New York City, where she worked as a consultant in the Current and Deferred Giving Program of the General Board of Global Ministries of The United Methodist Church. Upon her second retirement in 1990, she moved to Maryville, TN, and then on to Brooks-Howell Home in Asheville in 1998. In addition to her work responsibilities, Joyce was a trainer for Dale Carnegie courses, a delegate to two United Methodist General Conferences, president of the conference women’s organization, and an officer of the Business and Professional Women. She traveled extensively both for work and for pleasure, including many road trips in North America and visits to Europe and West Africa. She also tutored grade school children, taught in schools of Christian Mission, worked with a group developing educational programs and resources for women and finance, and served on the New York Conference Board of Trustees of the United Methodist Church, a role that included developing plans for training sessions for United Methodist Women in several language groups across the country. She is preceded in death by her dear friend and partner, Elaine M. Gasser; her parents; her sister Marilou Anderegg; her sister Mercedes (Teedie) Anderegg Hagberg; her brother-in-law, Rev. Franklin G. Hagberg; and her brother, Rev. John P. Anderegg. She is survived by her sister-in-law, Bobbie Jean Anderegg, and her eight nieces and one nephew. A Celebration of Life service will be held at 10:00 am, Friday, January 15, 2016, in the Memorial Chapel at Brooks-Howell Home, 266 Merrimon Avenue, Asheville, NC 28801. Interment of Ashes will take place later this summer in Pennsylvania. In lieu of flowers, memorial contributions can be made to the Brooks-Howell Home Endowment Fund.

The family of Joyce Louise Anderegg created this Life Tributes page to make it easy to share your memories.

Joyce Louise Anderegg, 94, of Asheville, NC, passed away on December...

Send flowers to the Anderegg family.