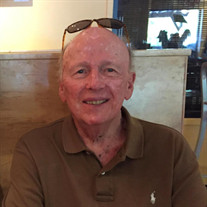 Dr. Karl Ffolliott Bitter passed away peacefully at home on April 15th, 2022, Good Friday. Dr. Bitter was born in Johnson City, Tennessee on Christmas Day, 1935. He was the son of the late Millicent Ffolliott Bitter and Dr. John Leonard Bitter. Dr. Bitter was a graduate of Lee H. Edwards High School, Davidson College and UNC School of Medicine. He served his internship in Chapel Hill. He then served his country for two years in the USAir Force as a flight surgeon. He completed his medical training in general surgery and urology at Jackson Memorial Hospital in Miami, Florida. He served on the staff of Memorial Mission Hospital and St. Joseph’s for 31 years and spent one year as Chief of Surgery at Memorial Mission. After his retirement, he became a member of the staff at the VA Hospital with the Urology Department. Karl was a member of Trinity Episcopal Church, Biltmore Forest Country Club, the Rhododendron Brigade of Guards, and Sam’s Club. Dr. Bitter enjoyed spending time with his family, and also with his friends while hiking, fishing, and camping. One of his favorite hiking trips was to Mount Kilimanjaro with his Asheville Hiking Club after he retired. He said, “it was a great hike up and a wheelbarrow ride down with a broken ankle.” He enjoyed traveling with his wife and their friends overseas to Europe. Karl was preceded in death by his brothers: John L. Bitter, Steven D. Bitter, and Phillip K. Bitter. He is survived by his wife of 64 years, Mary Gladys Bitter; his sister, Millicent Bitter Elmore and her husband, Miles; Karl and MG’s children: Diana, her husband, Paul Holley, and her children Sam, Ellie, and Mary; Allison, her husband, Ray Jay Benoit, and her children Jake and Kelly; Mary Key, her husband, Richard Von Lange, and their dog Navy; Karl Bitter Jr. and his children Patten and Luke. The memorial service will be held Saturday, April 23rd, 2022 at 11 am at Trinity Episcopal Church. A reception will follow the service in Tuton Hall. In lieu of flowers, memorials may be directed to Hospice/Care Partners or Trinity Episcopal Church. Morris Funeral and Cremation Care is in charge of the funeral arrangements.

The family of Dr. Karl Ffolliott Bitter created this Life Tributes page to make it easy to share your memories.

Send flowers to the Bitter family.