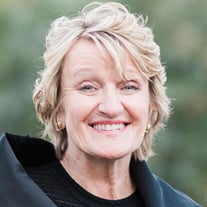 Kathryn Carr Warner of Asheville, North Carolina died peacefully at Solace August 11, 2017. She was surrounded in death, as she always was in life, by her family who adored her. She lived her life fully until the very end. Her bucket list this past year included a trip to Canada with her daughter and husband, being Mother of the Bride in March, seeing her younger son get accepted to Johns Hopkins Medical School, multiple trips to Atlanta to visit her older son and his family, and backpacking El Camino with girlfriends in Spain in May. She was born July 30, 1954 in Orange, New Jersey to James A. and Robin Carr. As a child, her family moved around the Northeast, finally settling in Charlotte, North Carolina where she attended high school at South Mecklenburg. Kathryn received her Bachelors degree in Economics from the University of North Carolina at Chapel Hill where she met the eventual love of her life, John Warner. Kathryn and John married in 1980 in Charlotte. They moved to the Asheville area in 1982 and started Warner Photography. Kathryn managed the business for the past 35 years. A lifelong learner, Kathryn received her Masters of Accounting degree from Western Carolina University at age 57. For the past 10 years, Kathryn sat on the Board of Bonded Distribution in Charlotte, North Carolina. Kathryn was passionate about the arts, education, literacy, and social justice. Throughout her life, she volunteered with Hunger Awareness, HelpMate, the United Way Grants Committee, the Rescue Mission, Children’s Welfare League and she served on the board of the KIPP Academy. She was an avid reader, yogi, accomplished gardener, cyclist, and tireless hiker. Kathryn was a warm and generous soul with a loving smile. Her husband and children felt her fierce love daily. She never sought the spotlight in any endeavor, but Kathryn’s quiet strength, intelligence, acceptance, and compassion guided her family, friends and even strangers in multiple ways. She was a North Star for those lucky enough to walk through this life with her. Kathryn is survived, and will be ever adored, by her husband John Warner of Asheville, son Jamie Warner, his wife, Amanda Warner, granddaughter, Madeline Warner, of Atlanta, Georgia, son Sam Warner of Baltimore, Maryland, and daughter Erin Warner Guill and her husband Matthew Guill of New York City. She is also survived by her mother Robin Carr, brother Scott Carr and wife, Susan Carr, sister Barbara Carr Woodall and her brother’s widow Vickie Carr, all of Charlotte, North Carolina. A Memorial Mass will be said for Kathryn at St. Eugene’s Catholic Church on Friday, August 25, 2017 at 11am in Asheville, North Carolina. A Celebration of her Life will be held at Camp Rockmont in Black Mountain, North Carolina on Sunday, August 27, 2017 at 4pm at Lake Eden Hall (375 Lake Eden Road). In lieu of flowers, donations can be made to Read2Succeed of Asheville (www.r2sasheville.org) or the Solace Center of Asheville.

Kathryn Carr Warner of Asheville, North Carolina died peacefully at Solace August 11, 2017. She was surrounded in death, as she always was in life, by her family who adored her. She lived her life fully until the very end. Her bucket list this... View Obituary & Service Information

The family of Kathryn "K.K." Warner created this Life Tributes page to make it easy to share your memories.

Send flowers to the Warner family.