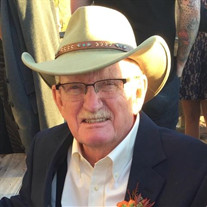 Larry Sidney Veeder, 82, passed away on Tuesday February 12, 2019. A native of Watford City, ND, Larry was born on May 13, 1936 to the late Sidney and Agnes Rolfsrud Veeder. Larry grew up on a farm in western North Dakota where he developed his artistic talents at a young age. The culture and western landscape served as an inspiration for his artwork throughout his life. He graduated high school in 1955. On June 8, 1956, Larry married Carolyn Lockhart, his high school sweetheart. Larry then attended the Minneapolis School of Art and graduated in 1959 in a BA in Fine Arts. Larry and Carolyn moved to Red Wing in 1962, where he was instrumental in developing a thriving art community. They lived there full time until 2006 when they purchased a home in the Sedona Arizona area to live in the winter. He worked for Jostens as an Art Director for several years until leaving the company in the 1970s to further pursue his career as a professional artist. Larry and Carolyn relocated to Asheville NC in 2016 to be closer to family when Larry’s health declined. Larry loved the mountains of Montana and the fly fishing opportunities that this part of the country offered. He was able to share his love of fly fishing with his family throughout his life, and with his son-in-law Dennis while living in North Carolina. Larry was a generous, caring person. He loved to spend time with his grandchildren, often teaching them his art and fishing skills. He knew how to make the best of almost any situation, even when he recognized that his short term memory was fading and his ability to paint was leaving him. Larry had a sense of humor and often surprised people with his dry wit. Larry was preceded in death by his parents and his brother, Leroy Veeder. He is survived by his loving wife of 62 years, Carolyn; his brother, David Veeder of Billings Montana and sister Rosalie Veeder of Missoula Montana; daughters, Kathy Boos (Dennis) of Asheville NC, Julia Crozier (Bill) of Winona MN; 5 grandchildren, Lauren Beaudry (Austin TX), Alice Crozier (Minneapolis MN), Andrea Beaudry (Asheville NC), Bridgette Miles (Madison WI) and Theresa Crozier (Mankato, MN). 4 great grandchildren with a 5th due in July. Larry is also survived by 3 nieces and a nephew. Larry will be greatly missed by his family and friends.

Larry Sidney Veeder, 82, passed away on Tuesday February 12, 2019. A native of Watford City, ND, Larry was born on May 13, 1936 to the late Sidney and Agnes Rolfsrud Veeder. Larry grew up on a farm in western North Dakota where he developed... View Obituary & Service Information

The family of Mr. Larry Sidney Veeder created this Life Tributes page to make it easy to share your memories.

Send flowers to the Veeder family.