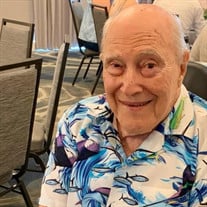 Leon Dave Rocamora, 100, died Sunday, January 10, 2021 at Mission Hospital, Asheville, NC, as a result of Covid-19. Leon was born on May 3, 1920 to Leon and Fan Baruch Rocamora in Asheville, NC. He was very active in Boy Scouts, becoming an Eagle Scout. He received The Silver Beaver award in 1970, for council-level distinguished service. When his father died, Leon was 15; his mother was suddenly running the family business, which would become Asheville Showcase. Leon started working at the store part time. Leon arranged his schedule at Lee Edwards High School so he could take the bus to the store every day to help his mother. Leon graduated from Georgia Tech in 1941 with a degree in mechanical engineering. He enlisted in the Navy that same year, becoming the principal operator of training centers for mechanics for engines on destroyers and submarines; he was later in charge of the heavy machinery on a U.S. base in Guam. As a veteran, Leon was able to go on one of the Rotary-sponsored Honor Flights to Washington, DC. It had a tremendous impact on him, especially the cheering crowds who greeted the returning vets at the airport in Asheville. In 1948, Leon was set up on a blind date with Dolores (Dot) Shmerling (of blessed memory) at a wedding in Augusta, GA. They were married four years later, on December 26, 1952 in Augusta. After his Navy stint was over, Leon returned to home to work at Asheville Showcase. Leon and his younger brother, Bill, ran the business for over 70 years. An accomplishment that Leon was most proud of was the founding of Equipment Distributors, Inc. EDI was a buying group and bona fide cooperative, a first for the industry. Located in downtown Asheville, the store had its share of visitors from time to time who were down on their luck and needed a meal or bus fare. Leon would call one of the local restaurants and say that so and so was on his way and that he would be happy to treat that person to a meal. Or he would send one of the store's drivers to the bus stop with bus fare for the person who wanted to get home. Leon was a great example for all around him of what it is to be a mensch. He was a wonderful husband, father and grandfather, and a friend to so many. Leon and Bill sold Asheville Showcase in 2008. Not ready to retire, Leon embarked on his second career. At age 88, he became a real estate broker. He also became involved in several community service activities, including Meals on Wheels, Manna Food Bank, and helping to serve meals to the Veterans at the Veterans Restoration Quarters. Leon was a wonderful storyteller, and he loved a good joke. He was an accomplished traveler and fisherman. He was an active, life-long member and Past President, among other roles, of Congregation Beth HaTephila in Asheville. In 2017, Leon and his dear friend, Karl Straus, posthumously, received Congregation Beth HaTephila’s first-ever Chaver Award. Leon was predeceased by his beloved wife Dot (of blessed memory) in 2002. He is survived by his brother William “Bill” of Asheville, NC; daughter Hermene Rocamora (Clarence “Corky” Rorrer) of Alexandria, VA, son Larry (Nancy) of Durham, NC; grandchildren Jeremy Burnside of Springfield, VA and Kelsea Burnside of Fairfax, VA, Leah Penland (Corbin) of Wilmington, NC, and Kayla Rocamora of Wilmington, NC; and great grandson Leon “Leo” Penland. The family is very grateful for a wonderful and vast group of friends of Leon in Asheville, too numerous to name, but including all the people he met through his decades-long, 6-days-a-week visits to swim (and hold court) at the YMCA. We would personally like to thank Margaret Baker, Hilary Paradise, and nieces Susan and Jane Rocamora and Jane’s son, David, for their friendship and the good, loving care of our beloved Leon, especially during this pandemic. There will be a private graveside funeral on January 12 in Asheville. Donations in Leon’s memory can be made to Congregation Beth HaTephila (bethhatephila.org), Meals on Wheels, Asheville (mowabc.org), or any charity you wish.

Leon Dave Rocamora, 100, died Sunday, January 10, 2021 at Mission Hospital, Asheville, NC, as a result of Covid-19. Leon was born on May 3, 1920 to Leon and Fan Baruch Rocamora in Asheville, NC. He was very active in Boy Scouts, becoming an... View Obituary & Service Information

The family of Leon Dave Rocamora created this Life Tributes page to make it easy to share your memories.

Send flowers to the Rocamora family.